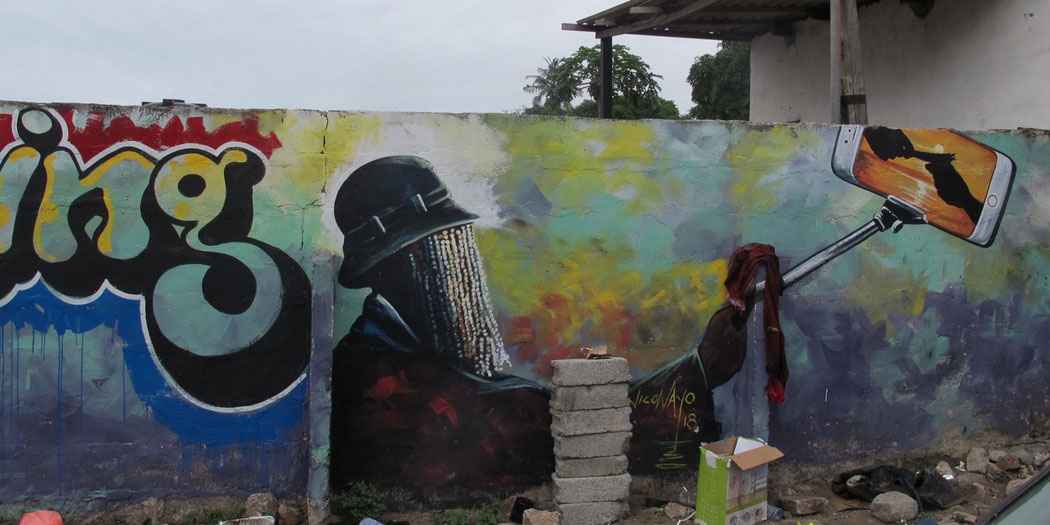 The current COVID-19 pandemic has shortened horizon lines and made it difficult to project forwards. Conditions are so mutable that plans need to be reconfigured as soon as they are made. Yet majority residents in fast-changing cities on the African continent have long been staring this kind of reality in the eye. One compelling place to look for ideas on future pathways are independent art spaces. Their working principles, or organisational logics, have much to offer others who are facing comparable conditions of flux. They create, from whatever is at hand, their own material and immaterial infrastructures that in turn instantiate new contexts; in short, DIY institution building as artistic practice.

Independent spaces are non-profit platforms, run by artists or at least infused with artistic thinking. They are structured as collectives, and increasingly deploy collaborative economies and solidarity networks in the face of various kinds of precarity, from structural to socio-political. They often facilitate more experimental work that engages city futures, geared as they are towards public interest motives.

Before global lockdown kicked in, I visited five such spaces in different African cities to try to figure out these organisational logics. The participants were: GoDown Art Centre in Nairobi (Kenya), ANO Institute of Art & Knowledge in Accra (Ghana), Townhouse Gallery in Cairo (Egypt), Zoma Museum in Addis Ababa (Ethiopia) and Nafasi Art Space in Dar es Salaam (Tanzania). My primary aim in the research study, conducted through the African Centre for Cities at University of Cape Town, was to observe artistic strategies and correlate them with innovations in the urban fabric. This process induced five shared working principles that reflect artistic thinking for institutions, as briefly summarised here.

The first principle, horizontality, is a collective and non-hierarchical organisational approach. It also informs curatorial ethos, which shuns a single authorial directive for dispersals of different kinds. On a deeper level, horizontality can be understood as a kind of epistemic disobedience that privileges local know-how. As Clapperton Chakanetsa Mavhunga says, in his book about science and technology in Africa, the most inspirational and urgently needed innovations derive from building upon a thorough understanding of local knowledge “as a source of technologies […] to unleash opportunity from what people are already doing”. (1)

Secondly, ideas of re-use, recovery and repair literally and symbolically generate a principle of second chance. This is evident in artistic practice, which often repurposes found elements into second lives, and extends to giving people and situations another shot.

The third principle is elasticity, a degree of flexibility when responding to fast-changing conditions and variables. Sometimes this is structural. The Townhouse Gallery was rebuilt with the help of neighbours in an act of resilience following a government raid, its physical collapse and forced demolition. Other times, elasticity is a conceptual act of re-imagination, or, when circumstances might demand resistance, a refusal.

Mobilities of different kinds inform the fourth principle, performativity, which believes in the capacity for contemporary art not only to represent something but also to instantiate new contexts. In short: for doing things with art. I derive that understanding from John L. Austin’s seminal work on linguistics, How to Do Things with Words, in which he describes certain words as “performatives”. (2) Such forms change the world by the force of their utterance; “I bequeath” is one example he offers; “I bet” is another. Performatives do not merely say something, but actually do something, as Austin puts it. Contemporary art can be performative in that sense too.

The fifth and final principle, convergence, is what fuses the past, present and future into an intensified “now”. Zoma Museum, for instance, created its new futuristic-looking buildings with local artisans, based on vernacular architectural techniques. Its physical form is an artwork, and the organisation functions like one. Zoma runs on ecological principles: reclaiming previously polluted ground, and showing radical responsibility to context, in this case by taking on the running of an inherited kindergarten on its newly relocated site.

Together, these five key principles reflect a different understanding of contemporary art, considering it closely imbricated with everyday life and latent in social relations. Take by way of example the ANO Institute in Accra. Standing right outside ANO, next to a road, is a mobile museum designed by the architect Latifah Iddriss. It takes a trading kiosk as its design referent, a ubiquitous urban form in Accra and elsewhere on the continent. A kiosk is accessible, mobile and multipurpose. It could house a hairdresser’s salon, a hardware or trading store. Reconfigured here, the collapsible and nomadic form represents an ongoing project at ANO, investigating the form and function of future museums.

In 2018, the mobile museum toured the ten regions of Ghana to canvass people along the way about what art and culture meant to them, and how they would like to see it represented. Their answers would challenge white-cube notions to better reflect what ANO calls the fluidity of time and polyvocality in Ghana’s key cultural forms, the afahye (festivals).

Indeed: most of the artistic programming observed during this research study occurred in public space, or related to it. Particularly emblematic was the GoDown’s annual Nai Ni Who? (Who is Nairobi?) festival. Each week, a different neighbourhood curated their own events to highlight aspects of local life. In 2018, this centred upon neighbourhood-led walks. Walking the city leads to all sorts of serendipities that are just as important as hours in the archives, as Ato Quayson writes in his book about Accra’s Oxford Street. (3) It offers up “expressive fragments” that may encapsulate a larger social totality, “flashpoints where spatial practices reveal themselves” (2014: 21). Juxtaposing these kinds of flashpoints with artistic forms and strategies induced my project findings.

They also built upon previous research into artistic interventions in South Africa, which led to the notion of public space as common space. Common space belongs to everybody and to nobody, and is thus contested, negotiated and performed anew, every single day. (4) Independent art spaces enact a similar kind of “commoning”, as the term goes, at an organisational level. As a collective resource leveraged for the public good, they help deduce what a common space could comprise. Their evolving financial models reflect this orientation: they have increasingly less reliance on foreign donors and more on local philanthropy, crowdsourcing and turning intangible assets into income-generators for sustainability.

This kind of commoning offers what Simon Njami called “breathing space”, when describing the significance of biennales on the African continent. At the time, he was curating the 2018 Off Biennalein Cairo, which arose as an independent event in response to the state’s closing down of the official biennale in 2010. Njami told me: “It’s not about art […] it’s about people, discussions, challenges and exchange. Because Africans don’t know Africa, everyone thinks their situation is unique. It’s physically complicated [to get around]. They are functioning as an island [...]. Biennales are moments where people gather, talk and discover they have the same issues, and exchange solutions and strategies. Because even if the basic issues are the same, the way to fight it is different because the background and the environment is different.”

Independent art spaces are running compelling institutional experiments in such dialogues, as proactive residents with a stake in fast-changing cities. Those changes on the African continent are partly to do with intense rates of modern urbanisation in the global South, with significant youth-skewed demographics and a growing middle class. It also concerns socio-political change and decolonisation imperatives.

In the words of urban scholar Teresa Caldeira, people in the global South “autoconstruct” their homes and cities, following the Latin American term for it. They are “in the making[…]never quite done, always being altered, expanded, and elaborated upon”. (5) The crucial role of residents in collectively producing such space unsettles official logics, she says; “they do not contest these logics directly as much as operate with them in transversal ways”. (6) The state is multi-present, but frequently acts after the factto modify spaces that are already built and inhabited, she adds.

Independent art spaces autoconstruct institutional nodes that can have multiplier effects beyond their modest scale. In the findings, I call their self-made pathways outlined above “panya routes”, inspired by the Kenyan lingo for alternative thoroughfares created by motorbike taxis (boda bodas) and pedestrians. Urban planners call such collectively authored routes “desire lines”, usually running contrary to design or planning; to geologists, they are preferential pathways in the terrain. Whatever the term, every city has them: alternative routes that reveal where people actually want to go. Peter Macfadyen has termed a similar kind of autoconstructed political work “flatpack democracy”, such as a local UK constituency whose residents took control of the town council using participatory politics. (7)

Independent art spaces on the African continent, alongside peers elsewhere, have been flat-packing democracy for years. It very much resembles the mutual aid and local networking mechanisms that have flourished in other places under the current conditions of pandemic. With any luck, the DIY principles of the participant platforms outlined here can infuse other kinds of institution-building with artistic thinking. Because art, with its embodiment of the notions of creativity and freedom, needs to assert itself, amid what Ngũgĩ Wa Thiong’o calls “a credit card mentality” that is mortgaging the future to satisfy the present. “It needs to be […] the embodiment of dreams for a truly human world where the progress of any one person is not dependent on the downfall of another”. (8)

(4) The case of the removal of the Rhodes statue in 2015 from a Cape Town university campus is instructive. For more on this, see “The Second Lives of Zombie Monuments”, https://africasacountry.com/2020/07/the-second-lives-of-zombie-monuments; and “Zombie Monument: Public Art and Performing the Present”: https://doi.org/10.1016/j.cities.2017.11.002.

(8) Wa Thiong’o, Ngũgĩ, Penpoints, Gunpoints, and Dreams. Towards a Critical Theory of the Arts and the State in Africa, Oxford: Clarendon Press, 1998.