Curating the City. The Changing Nature of Public Space 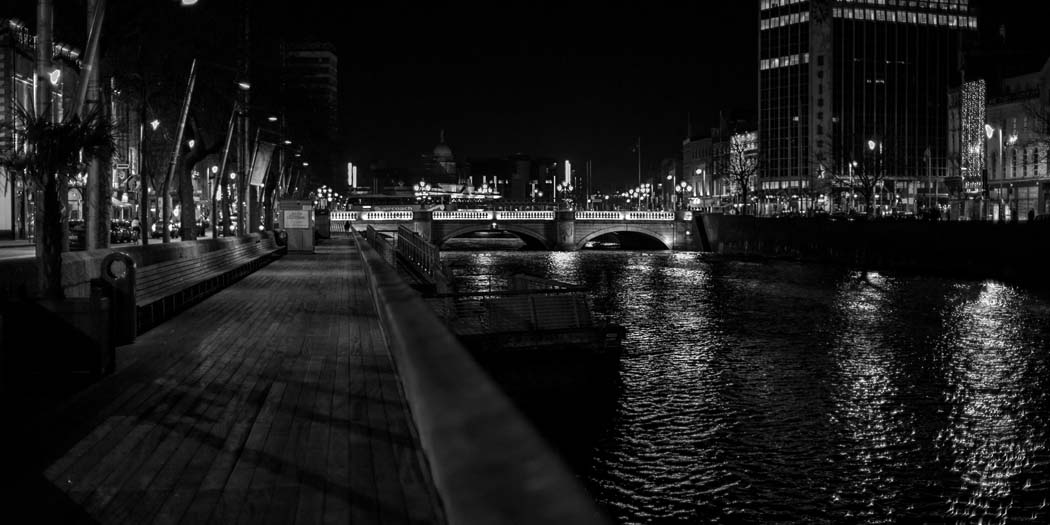 "Public space has always been contested. But it is also open to different cultural readings at different times and in different places".

From: One Hundred & One Hosannas for Architecture: A Chronicle of Architectural Culture in Millennial Ireland by Shane O'Toole. Gandon Editions, 2017.
First published in The Sunday Times, March 26, 2006: 'Reclaiming the streets')

It's not easy to find a seat in the centre of Dublin. If you want to buy a coffee, there's plenty of choice. But if you fancy just sitting and dreaming or resting your legs while shopping, you'd better head for the boardwalk. Or at least be near a public park. Otherwise, there's not a seat in sight between Parnell Square and St Stephen's Green. It is hardly a pedestrian-friendly gesture, but the city council says there is a perception that benches attract people who don't move on, so they're not suitable street furniture.

Public space has always been contested. But it is also open to different cultural readings at different times and in different places. For some – as in America, where even the city footpaths are privately owned, belonging to the buildings they front – it is normal that public space is in private hands, while for others, public space should be literally and psychologically free of charge. Earlier this month, 400,000 people braved the elements to watch the annual St Patrick's spectacle pass through the streets of the capital. Less than three weeks earlier, however, riots had scarred the same streets following the aborted Love Ulster parade, resulting in scenes of anarchy.

The recent events have focussed attention on the questions surrounding public spaces in Ireland. What is public space? Is its nature changing and, if so, how? Will it remain the artery of commerce and a stage for political protest and demonstration or is its future primarily as a locus of celebration and mass entertainment? Who pays? And whose space is it anyway?

In Europe, the understanding of what constitutes public space was codified in 1748 by Giambattista Nolli in his exquisitely engraved map of Rome, widely regarded as one of the most important urban documents ever created. Nolli’s map reveals the intimate boundaries of public and private space within the city: by treating the lobbies, courts and interior spaces of public buildings equally with streets and squares, he delineated the true extent of the stage where Rome’s civic life was lived. The first Ordnance Survey maps of Dublin, published in 1847, took their cue from Nolli, accurately depicting the ground floor plans of virtually all public buildings, including banks, schools and churches. (The 33 large-scale maps record Dublin 40 years after the Act of Union, by which time the Hibernian metropolis created by the Georgians had declined from being the 2nd to the 10th city of the United Kingdom.)

Now, as then, our public space is not homogeneous. It includes parks and buildings as well as streets and squares; its ownership may be public or private – and the nature of our access to it can vary greatly. We are often granted access only under licence. Trinity College, with its majestic sequence of squares and passages, is a case in point. Another is the Setanta centre, where a notice reads: 'The owners permit members of the public to use the walkways of these premises from Nassau Street to Setanta Place and vice versa on the pure understanding that no liability for injuries, loss or damages will attach to them, subject always to their right to revoke this permission at any time.'

Some public space can be taken away or privatised – as happened in recent years when both the American embassy in Ballsbridge and the Central Bank in Dame Street withdrew behind tall railings. The 18th-century Rotunda Pleasure Gardens in Parnell Square have long since vanished under the tide of development at the hospital, although plans for their reinstatement are mooted. Merrion Square opened as a public park in 1974 when the Archdiocese of Dublin abandoned plans to build a Catholic cathedral on the site. (Fitzwilliam Square, on the other hand, remains private.) The parks, long our most cherished public spaces, have their own security wardens. They close in the evenings. Bye-laws prohibit cycling and walking on the grass.

Such limits on the use of public space benefit us all. When parks change their nature, for example, as happened disastrously at Eyre Square, Galway – where the railings were removed in an ill-advised 'democratic' gesture in the 1960s – it can take decades to put things right again. Eyre Square became a magnet for antisocial behavior over recent decades. Increasingly, new public spaces are apolitical, created as part of retail developments and devoted to consumption: from Powerscourt Townhouse and St Stephen’s Green to The Square in Tallaght and Dundrum Town Centre, which attracted 75,000 visitors on its first day of business last year. The idea is an old, but enduring, one: the enclosed shopping mall was invented by Victor Gruen, possibly the most influential architect of the 20th century, at Southdale, just outside Minneapolis, in 1956. Gruen put stores on two levels, connected by escalators. In the middle he placed a kind of town square, a 'garden court' under a skylight. They are still building the winning formula that delivers safety, comfort, hygiene and convenience.

We may not yet have succumbed to the private nirvana of consumption that is Daslu – São Paolo’s luxury boutique, where, because the rich do not walk, you cannot enter off the street but must arrive by car (or helicopter) and pass through a security checkpoint – but Dundrum Town Centre betrays some of its less appealing characteristics: it is a self-referential walled city, cut off from the devastated heart of Dundrum village by a moat of traffic. In contrast, city centre retail developments have generally sought to extend the surrounding network of urban connections to create new pedestalian routes. One example is Dublin's new Habitat store, which links Suffolk Street and College Green, providing a casual shortcut that puts the entire ground floor retail space on display to passers by.

But shopping alone cannot save the city. In the late 1980s it dawned on authorities throughout the developed world that, if cities were to survive and prosper in the face of challenges posed by suburbia and the growth in car ownership, they had to be more than simply places of production, consumption and intellectual exchange. They had to become stages that would attract people to them, a necessity that has been heightened by increasing wealth and access to cheap air travel. Cities have to be theatres for public life, not just machines for production. The city should be curated as a work of art or, if you like, managed as a great theatre.

The model that was adopted was another post-war institution: the first theme park. Main Street, USA – two short blocks of charming turn-of-the-century nostalgia, replete with the aroma of fresh-baked cookies wafting through the air – opened at Disneyland in California on July 17, 1955. All successful cities across Europe and the US – from Barcelona, with its myriad small public spaces and support for street spectacle, to New York, where Central Park was turned around over the past generation from a city-owned antisocial space to a place of public 'happenings', managed and programmed by a private trust, the Central Park Conservancy – learnt the lesson.

Public space can be reclaimed to regenerate the economic and social life of urban areas. But it must feel safe, comfortable and pedestrian-friendly. That is the motivation behind Dublin's Temple Bar, O’Connell Street, the new Liffey bridges, the Boardwalk and the proposed Grand Canal Square in Docklands – with the architecture eschewing nostalgia, however. It is what drives the animation of our public spaces, whether it’s the city marathon, fireworks displays such as Skyfest or Temple Bar’s annual public arts programme, Diversions. Healthy cities demand constant care and attention. And constant reinvention – the city as spectacle rather than theme park.

What are the implications for public space? Public is a bad word in Ireland right now. The public sector is denigrated as the private sector is lauded. Public transport is not sexy. Nobody who can afford a private alternative will use the public health service. The implication seems to be clear. If public space is to be successful, it must increasingly adopt the mannerisms of private space. That way, Irish society will get the public space it wants or, at least, deserves.