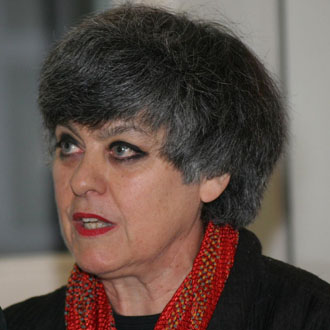 Architect, landscaper, and lecturer. Member of the Prize’s Board of Experts.

An architect, landscaper and lecturer at the Design Institute of Outdoor Spaces of the Academy of Fine Arts of Munich, Maria Auböck studied Architecture at the Vienna University of Technology, and in 1985 opened her own studio in Vienna, where she was joined by János Kárász two years later. One noteworthy part of the Auböck + Kárász projects, which are mainly in landscape and urban planning, is their rehabilitation of historic gardens.

In 2015, Auböck received the Silbernes Ehrenzeichen für Verdienste um das Land Wien (Silver Medal for Services to the City of Vienna). She has also been a member of several advisory boards for urban projects and artistic interventions in public spaces of cities like Berlin, Vienna, Munich and Salzburg as well as being a jury member for international competitions in cities of Austria, Germany, Italy, and Switzerland. Notable among her publications is Das Belvedere: Der Garten des Prinzen Eugen in Wien (Holzhausen, 2003).