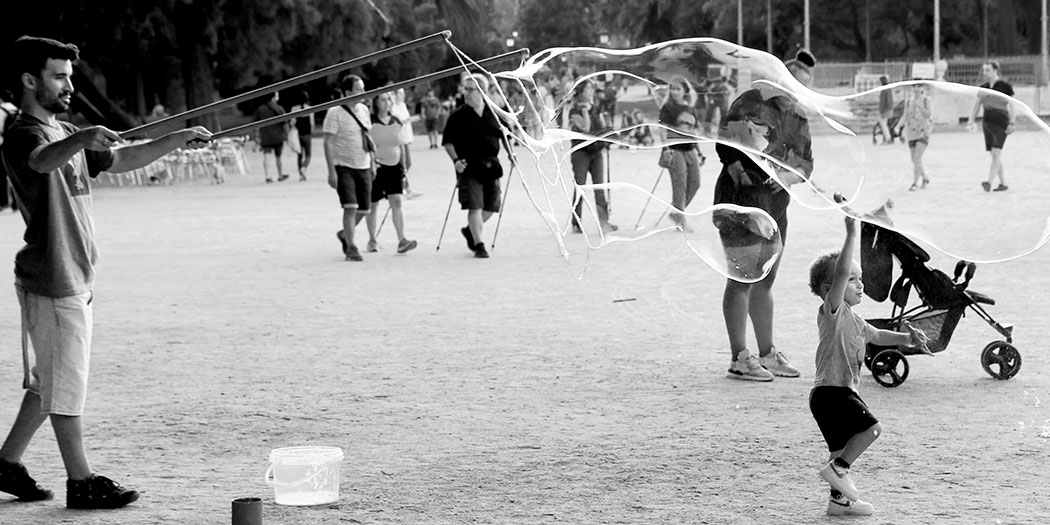 What are the responses of designers and architects to the crisis of the pandemic with regard to public spaces? The architecture critic Hans Ebeling observes that the debate about the spatial implications of confinement has mostly focused on the home and workplace, while public space has only been marginally present. He analyses proposals that have recently appeared in specialist media, through competitions for ideas, and in a range of municipal initiatives, and indicates the urban transformation trends linked with sustainable and inclusive public spaces.

Architects, urban planners, and landscape designers are optimists, if only because of the professional confidence that their work can make the world a better place. Design optimism is fundamental for interventions in public space as well, but has a different meaning since the outbreak of the pandemic.

The responses of designers to the pandemic crisis fall generally in three categories. One group of designers assume this will all pass, and we will eventually return to a world not dissimilar to the pre-pandemic one, where people will interact in public in the same way as before. These designers are mostly sitting out this crisis, meanwhile producing plans that do not really differ from anything they would have designed a year ago.

Others expect that there will be a ‘new normal’, and they are franticly inventing new means to adjust public spaces to these changed circumstances, counter-intuitively designing to keep people away from each other. A third group hopes that this pandemic will be an opportunity to achieve more fundamental changes in urban policies, that will result in a ‘different normal’.

A couple of months in, the pandemic has mainly led to ad hoc adjustments to keep people apart. But there is also a growing number of proposals to reconfigure urban public spaces more permanently, assuming that the virus will impact our daily lives for an unforeseeable period of time, for what is called a two-metre society. A case in point is ‘Where We Stand’, an initiative of David Michon with Ask Us For Ideas, who invited 15 design offices, mainly from Europe and the US, ‘to help reimagine public spaces to fit the new socially-distanced demands we must place on them, as we grapple with a global pandemic. Choosing an admired public space, each agency eschews the go-to language of caution and restriction, discovering beautiful ways to encourage safe behaviour and reoccupy our parks, streets, market squares and sports fields with a feeling of ease, enjoyment and even festivity.’

Half of the ‘Where We Stand’ proposals rely on objects to create islands in space, to cluster-and-divide people. The other projects are basically flat interventions, using painted shapes, dots and lines (in one case virtually), for the same reasons of crowd management and distance-keeping. Remarkably, these flat proposals, which look particularly great from a high viewpoint, come from the same toolkit of paint and tape which shop owners have been using lately to improvise lines of shoppers in front of their stores.

Despite the accompanying generous language, most of the fifteen projects of ‘Where We Stand’ are rather prescriptive in how people are supposed to behave in these public spaces. In this respect, these projects do not differ from most other responses to the pandemic, which leave little to chance either. Whereas this trend has been reinforced by the coronavirus, it originated long before the pandemic began, in the increasing surveilled public domain that offers less and less room for any aberrant behaviour.

‘Where We Stand’ is exceptional in its focus on public space, which is otherwise only marginally present in the discussion on spatial implications of the lockdown, which focusses mainly on the home, the workplace, and the home as workplace.

The news site Dezeen can be taken as an index of the mood in the design world. On 27 January it published its first Covid-related item, under the title ‘China building 1,000-bed hospital in 10 days to treat coronavirus.’ Since then, the website has put out approximately fifty pieces per month, first mainly about ideas for emergency buildings, 3D-printed medical equipment, and protective gear, followed by a stream of announcements of cancelled design events, all kinds of Instagrammable and often slightly silly-looking social-distancing tools, reflections on working from home, new office lay-outs, contradicting predictions about worlds that will never be the same, new configurations for airplanes seating, obituaries of designers who died of the coronavirus, and films to watch while stuck in lockdown.

Public space did receive remarkably little attention. Aside from an article about ‘Where We Stand’ Dezeen published for instance a playground (designed by Rimbin) which allows two kids to use a seesaw while each being in their own protective bubble, a maze-like Parc de la Distance by Christian Precht, and a project for a residential neighbourhood in Tirana, designed by Stefano Boeri Architetti, which was just in time to be branded as post-pandemic and virus-resilient (and eco-friendly, socially diverse, earthquake-safe and much more).

Dezeen also published an overview of how several European and American cities are ‘drawing up plans to take street space away from cars in favour of cyclists and pedestrians in response to the coronavirus pandemic’. While these proposals are framed as an immediate response to the crisis, in reality that are part of a broader and longstanding effort to make cities more sustainable. The pandemic is taken as an opportunity to give an extra push to the reduction of car traffic, and the promotion of greener alternatives.

The article addresses for instance Milan’s ‘Strade aperte’, a project the city has developed in collaboration with Bloomberg Associates, the non-profit consulting arm of Bloomberg Philanthropies. ‘Strade aperte’ is essentially the same as the pre-pandemic collaboration of Bloomberg Associates and the City of Milan on the so called ‘Piazze aperte’, meant to transform ‘underutilized street space into vibrant social plazas for the benefit of residents and local businesses’. Both these projects are more or less replicating the strategy used in the transformation of Times Square, with Danish public space sage Jan Gehl as consultant, which happened while Bloomberg was mayor of New York.

Many Bloomberg Associates’ projects propose a similar ‘Starbucksization’ of public space, applying the same formula from Mexico City to Detroit to Athens, often topping it off with the same brightly coloured French bistro chairs and tables that were placed on Times Square: reducing the space for moving and parked cars, painting bike lanes on the asphalt, widening, and painting, the sidewalks and adding street furniture and green.

Particularly paint has become a common civic tool to signal change. It is a literally superficial way to make cities more liveable. Earlier this century, a similar idea was behind Edu Rama’s project as mayor of Tirana to paint buildings in brightly coloured patterns, which was, according to the title of Rama’s TED Talk, a means to ‘take back your city’.

In the case of Milan (and other Bloomberg projects) colour is used to demarcate space for pedestrians and bike lanes, building upon a venerable — and predominantly European —practice which has found an additional argument in the precautions people have to take during the pandemic: wider sidewalks allow people to keep a two-metre distance, bike lanes are necessary to accommodate the growing number of cyclists who are avoiding public transportation. But it is in essence the continuation of a much older strategy to reconquer urban space from the car, which is also behind decades of planning in bicycle-oriented cities like Amsterdam and Copenhagen, or increasingly bike-friendly cities like Barcelona, Paris, Vienna, Antwerp and Oslo.

The pandemic is not causing a turning point in civic approaches to public space and mobility, but rather an opportunity for cities to accelerate what has been already in the works. However not without challenges. Public transportation, long promoted as a viable alternative for private cars, has fallen out of grace since the beginning of the pandemic. Bus, tram, subway and train have lost ridership and momentarily do not seem attractive propositions right now to discourage car use. On the upside, cycling has become more popular, offering a convincing argument in favour of the development of new, better, and more, cycling infrastructure. This could actually have an enduring effect on urban mobility and the quality of life, given that the availability of good cycling infrastructure entices more people to use it more frequently.

It remains to be seen if and how the pandemic will change the European city in the long run. It depends to a large extent on factors beyond the purview of designers of public space, for instance how many shops, stores, bars and restaurants will survive, and whether tourism will rebound.(If the lockdowns have proved anything, it is how much city life, and public spaces, rely on consumption and commerce).

With all the new, written and unwritten, rules prescribing how to behave and interact with others, the usage of public spaces is now more regimented, making them more predictable than before. If anything, the pandemic has robbed public spaces of some of their habitual use and many of their unexpected, accidental pleasures. It shows that what is normally simply taken for granted as the character and atmosphere of public spaces, is only partially determined by its hardware, and much more dependent on how we are actually able and willing to use it.