The square, the power, the citizenship 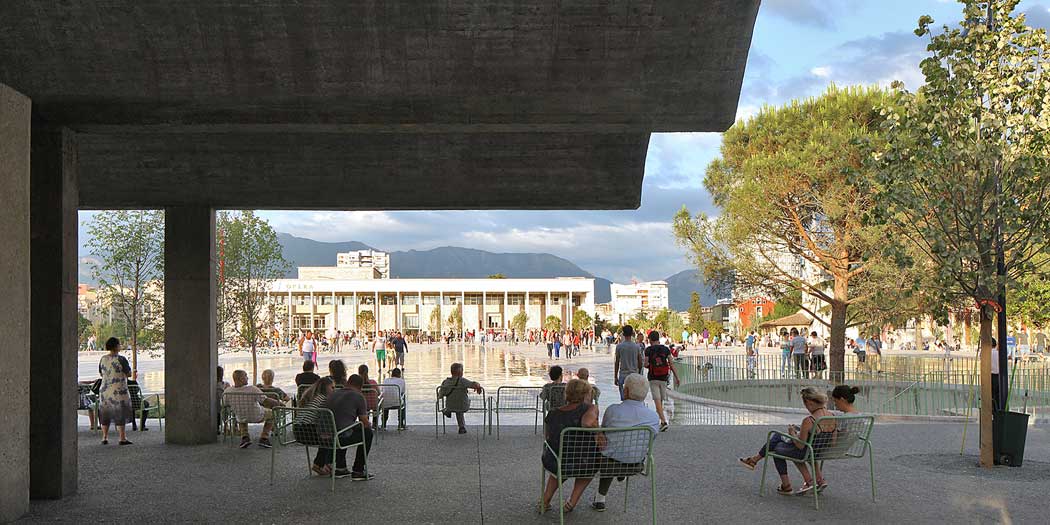 Skanderbeg Square is in the centre of Tirana, the capital of Albania. And it is rather more than a square since it is a kind of mirror which reflects the history of the country and also one where Albanian society can see itself.

The square was born around the time that Tirana became the capital of Albania, in the early 1920s, not long after the country gained its independence. Then, it was on the outskirts of the city while the centre, constructed around the cluster of palaces belonging to a prominent member of the local nobility, was located behind the adjoining mosque and clock tower. A modest building which appeared around this time on the far side of the square was Albania’s first parliament. After the Second World War this became the cultural club of Soviet residents and, later on, in the 1960s after the break with Moscow, a puppet theatre, which it continues to be to the present day. However, to return to the gestation of the square in the 1920s, in those days it was nominally a square but in fact it was more like a field, a piece of ground at the edge of the city, until it came to be surrounded by a complex of government buildings: the ministries, the City Hall, and the National Bank. This began to change Tirana’s urban plan as, one after another, avenues moving out from the square began to create a radial system spreading the city in other directions.

The square was also taking shape with this physical and, at the same time, symbolic construction of the new state. For a certain period, the epicentre, the heart of urban life was beating elsewhere and the square was assigned the role of a stage for political theatre. In fact, in all the photos and all the documentaries from the time it appears as a space for the ceremonies of power. Otherwise it was an enormous vacant lot.

This changed with the Italian occupation on the eve of the Second World War when the Albanian regime, a kind of operetta monarchy, was replaced by fascism. Then a new actor took centre stage: the masses. Their presence in demonstrations, both official and protesting, was notable although it could not yet be said that Albania had become a mass society. That change would be consummated in the post-war decades with the installation of totalitarian communism. And the presence of crowds in the square was no longer limited to official displays of power. There were also spontaneous gatherings but not in the form of demonstrations. They were more like the polar opposite of official shows because they took the form of leisure activity.

At this point, an explanation of the urban—and also cultural and socio-political—nature of the square and its surrounds is necessary. One of the radial streets starting at Skanderbeg Square is a great avenue, comparable in size with the Champs-Elysées, which led the Soviet writer Ilya Ehrenburg who visited Albania in 1945 to comment that he had seen many cities without an avenue but never an avenue without a city. Together with several buildings in the style of fascist modernism on the other side of the square, it has the shape of a Roman battle axe when seen from a plane. In the communist years a number of factors came together to change the function of Tirana’s great avenue as a public space, thus enriching the role of Skanderbeg Square. Before the communist regime, the avenue was a huge empty space because there were no automobiles but, during these years, in the absence of vehicles which, apart from those for government use, were prohibited, a new factor or, rather, a series of other factors, appeared. Now the crowds had gotten into the habit of coming out into public space not only for the demands of work and other kinds of obligatory movement but because—especially in the main cities—some elements of the modern lifestyle were already filtering into the culture of the country, and were gradually becoming more and more popular. One of these was spending leisure time outside the home. Although there was not much to see in the cinemas and still less in the theatres, there were football matches once a week. However, the most important aspect of this was the absence of women whose presence was particularly desirable in a society where the traditional norms of the patriarchy were being undermined and there was a struggle between the aspiration for freedom in people’s customs and the frustrating puritanism of official morality. Moreover, something had changed in the traditional meeting place, namely the cafés. Historically speaking, they were an exclusively male preserve and especially for older men but now this space was becoming accessible not only for younger men but for women as well, provided that they were duly accompanied by suitable representatives of the masculine gender. Nevertheless, owing to the progressive nationalisation of all businesses and because of the austerity preached in the official doctrine, the cafés were becoming increasingly scarcer. Dance halls were practically non-existent. The only thing left was going for a walk, as a way of meeting up with people and especially because of the visual encounter. Every afternoon, when it was not raining, tens of thousands of inhabitants of Tirana, and especially the young people, came out onto the public streets to see and be seen, which was the all-in-one substitute for shows, cafés, discotheques, and everything else. And there was no lack of space for walking in Tirana. There was the great avenue and also Skanderbeg Square which, with the afternoon promenading, became an extension of the boulevard. People, always in their Sunday best, strolled up and down for hours, again and again, greeting each other, exchanging looks or simply looking and being exposed to looks. It was a gigantic worldly, open-air salon or a show where everyone was at once actor and spectator.

The situation changed with the end of communism and the capitalist transformation of the economy. Both the great avenue and Skanderbeg Square began to fill up with cars and, accordingly, ceased to be places for people to walk. Meanwhile, in the square itself, the traffic was interrupted every time there was a demonstration protesting against or in support of the government. It became a symbol of shows of force to such an extent that, in the mid-1990s, the government decided that the opposition could not demonstrate there and, with this, its authority began to teeter. Whoever was in power had the square and the obverse was also true: whoever took the square had power.

As the years went by the situation calmed down, relatively speaking, and Skanderbeg Square basically became a place of transit for vehicles. Nevertheless, politics once again intervened, and very aggressively. In 2010, the then Mayor of Tirana, Edi Rama, the present prime minister, launched an ambitious plan to refurbish the square. However, a few months later, when he lost the municipal elections, the new mayor stopped the work on the square simply because this had been the project of a rival. Instead, he introduced several minor reforms which did little to change the form of the square and nothing to change its function while claiming that this was a provisional regulatory measure to pave the way for a new project of renovation. Which never happened.

In 2015, there was another change in the municipal government of Tirana and the mayor, Erion Veliaj, went back to the earlier project with some changes. The result is Skanderbeg Square as it is today. It has been given back to pedestrians or, rather, to citizens. This is a place where people walk past each other or meet, the kind of space that has been so greatly needed in the post-communist years. Yet it is in no way a regression to the past. The only thing that remains from the past is the presence of buildings representing different historical periods, from the Ottoman period through to today, all of this compressed like a Borgesian aleph in the National History Museum. Meanwhile, people’s habits have changed radically by comparison with the days when promenading, almost parading, was almost the only leisure activity of the inhabitants of Tirana. Now there are many bars and also discotheques but not cinemas or theatres, a fact that is related with the cultural corollaries of the model of capitalism which was implemented in Albania. In any case, Skanderbeg Square now has an essential role as an open space par excellence where people can meet and spend some time. Moreover, in a sociological context where citizens are too atomised to be obsessed about private life and where the commons are not yet on the horizon of individual concerns, it would not be an exaggeration to say that Skanderbeg Square is not only a mirror turned back to the past, but also a beam of light shining towards the future.