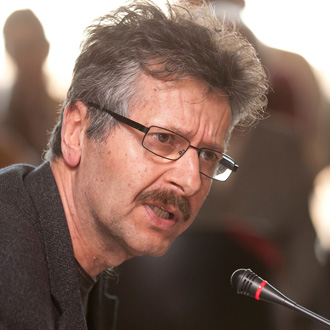 Writer and translator. Member of the Prize’s Board of Experts.

A resident in Barcelona since 1997 when he was accepted in the Refuge Cities programme of the Catalan Section of PEN International, he was a representative of this association and, for ten years, was an advisor to the Centre of Contemporary Culture of Barcelona (CCCB) in matters related with Eastern Europe. Although he still writes in his mother tongue, Albanian, he is a member of the Association of Catalan Language Writers (AELC), and his novels and short stories have been translated into English, Spanish, French, Italian, and Catalan, among other languages. Notable among his publications in Spanish are Confesión junto a una tumba vacía (Confessions by an Empty Tomb, Península, 1988), El último viaje de Ago Ymeri (The Last Journey of Ago Ymeri, Editorial Meteora, 2001), and the novel Angelus Novus (Siruela, 2017).

He also translates writers in the domain of the humanities, for example John Stuart Mill, Hannah Arendt, Eric Hobsbawm, George Steiner, Richard Rorty, and Zygmunt Bauman, as well as Catalan writers like Jaume Cabré and Jordi Puntí, among others. Notable, too, are his translations of The Concise Oxford Dictionary of Sociology and also Oriental Despotism by Karl August Wittfogel for which, in the latter case, he received the Prize for Best Translation of the Year in Albanbian in 2001. He has also been awarded other prizes, notable amongst which are the Balkania Prize 2015, and the Special Mention of the jury of the Prix Mediterranée Étranger 2018 for his novel Le jeu, la chute du ciel. He has frequently worked with the European Prize for Urban Public Space ever since it was first created.