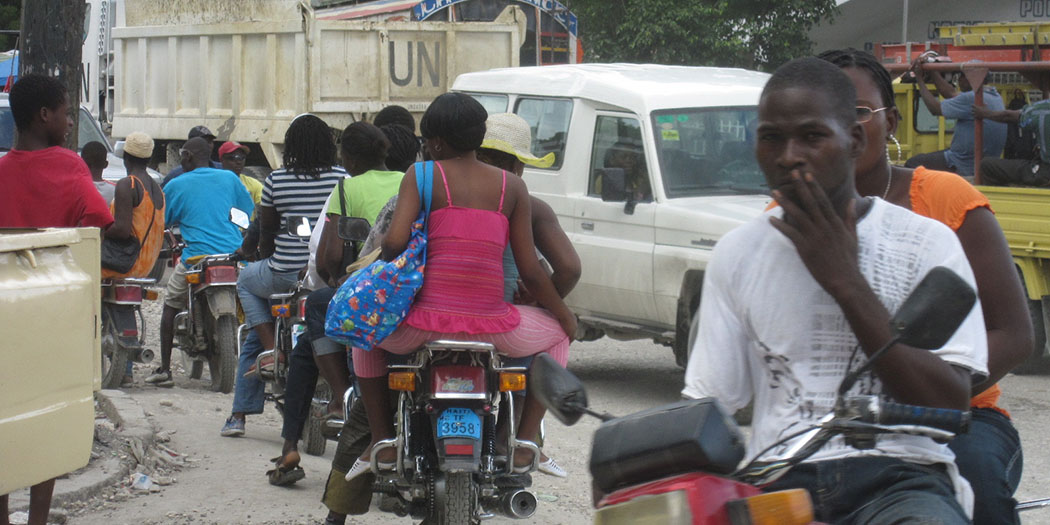 How can practices of overlapping access and cooperative rules for sharing help us envision transitions toward greater mobility justice in a world affected by the COVID-19 pandemic, ongoing climate disasters, colonial legacies and racial inequity? The concept of “commoning” has been mobilised in a wide range of recent environmental thought, political philosophy, migration studies, mobility studies and social movements. I want to suggest that commoning—as an active verb—can inform new design paradigms that work with communities to move towards greater mobility justice, which must be the basis for just transitions toward liveable futures.

The concept of “commons” has a deep history which is rooted in Medieval Europe and English common law, suggestive of land that is held in common for roaming, gathering resources and gleaning food. More recently, this has been widened to include “knowledge commons, digital commons, urban commons, health commons, cultural commons, etc.” (1) Commons are not just a space, a resource or a product, but also the affordances and capabilities for practices of moving, travelling, gathering and assembling, as well as pausing and dwelling in a shared collective. Commoning mobilities, I suggest, may be a way to recover habitability and the reproduction of life in a post-pandemic world that sits precariously on the threshold of social violence and ecological limits. (2)

Mobility as a Commons, Commons as Mobile

Commons have gained renewed currency in recent political debates about the crisis of modernity. Critical theorists have rediscovered the commons as a powerful organising principle for social movements. It was embraced in the anti-globalisation movement’s call to “reclaim the commons”, during the anti-WTO (World Trade Organisation) protests of 2001. It appears in Michael Hardt and Antonio Negri’s ongoing political project for building “commonwealth” and “assembly” by “constructing new, mobile constellations of shared life”, as well as both Naomi Klein and George Monbiot’s recent calls to restore and fortify the commons. (3)

Commons are neither public nor private, but can be understood as nonproperty. (4) Commons are not an empty space, but a socially produced shared space. As economist Elinor Ostrom argued, in a challenge to Garrett Hardin’s influential “tragedy of the commons” thesis, (5) the commons have always been collectively managed and governed by rules of customary shared usage, not simply a disorganised free-for-all. (6) This idea of the commons, however, has often been appropriated within urban planning and real estate development, and reduced to parks, plazas, public spaces or even building lobbies that are branded as “The Commons”. Rather than mobile practices of social sharing, the commons here are co-opted into the sedentary ontology of property and place-making. This creates public spaces that might be referred to as “Civic Commons”—like a project to “reimagine public space”, in my own city of Philadelphia—but are still grounded in maintaining private ownership, the expropriation of Indigenous and Black landholders, and exclusionary property.

If we conceive of mobility as a practice that is enacted within a shared commons, and the commons as mobile, then we can begin to understand that commoning must be an action, a verb, and not a sedentary public space. This notion of “commoning” crucially builds on the work of Silvia Federici and George Caffentzis which “helps us picture the ongoing and everyday work needed to reproduce a shared social sphere”. (7) As Marcela Oliver and Alexander Dwinell write regarding the Water War of Cochabamba, Bolivia, that took place in 2000, Federici and Caffentzis’ essay “Commons against and beyond capitalism” helped political activists understand that common goods like water were being appropriated by the state in the name of “the public”, but they were not controlled by the people. Their work on anti-capitalist commons and women’s reproductive labour showed that the stakes of the Water War were “not only to protect water but to create, produce, and generate new and different ways to recuperate and expand the commons and to exercise our power to take decisions over our own lives”. (8)

What can we learn from this recuperation and expansion of the commons today, in recovering from the pandemic and addressing the climate emergency?

Commoning is not just about a public space, shared territory, natural resource or open access product: it is a radical way of being, moving and making together a shared world, shared not only with other human beings but also with non-human beings. Such acts of commoning have their roots in Indigenous spiritual relations to the land, plants and animals as kin, not property. Despite the violent imposition of colonial “modernity” through property relations of enclosure and extraction, commoning has historically persisted. Vernacular commoning takes place along urban edges, extra-state margins and interstitial spaces. We find it within the home or in the urban guerrilla garden; (9) on the city square or zócalo where people meet and mingle (as beautifully described by Mexican activist Lydia Cacho); at the juncture of built and natural environments (woods, rivers, swamps, underground); at the edges of urban and national formations (borders, margins, mountains); and on the fugitive peripheries of geo-political-ecologies (oceans, islands, shoals). (10) We must reclaim these forms of commoning. The concept of a “mobile commons” first began to appear in the study of migration, where it challenged state-centred approaches with a more autonomous understanding of migrants’ own perspectives. Studies of migration refer to an “ontology of moving people” in which mobile commons are “generated, used, and extended [...] between people on the move”, like the migrant caravans moving from Central America, including the “shared knowledge, affective cooperation, mutual support and care between migrants” while journeying. (11) Fred Moten and Stefano Harney’s counter-point notion of the fugitive “undercommons” also hints at some ways to mobilise commoning as a form of moving through the world, a relational counter-position, an embodied relation with others, and an epistemic perspective from below. (12)

The idea of “commoning mobility” has also been advocated in recent studies of low-carbon mobility transitions, in order to envision more “inclusive and collaboratively governed” cities: how can we draw “on the logics of commoning such as communal decision-making practices, openness to new forms of perceiving the right to mobility as well as the right to immobility (the right not to be displaced), the awareness of the social production of mobility and the power relations inherent in it, as well as the commitment to creating equity and working in the interest of the public good”? (13)

Lauren Berlant also points towards “the difficulty of convening a world conjointly, although it is inconvenient and hard”. The commons concept, which she sees as incoherent, ambivalent, and “messed up”, nevertheless holds out a claim upon us: “Under its name, across the globe, communities tap into legacies of occupation to contest ownership rights and resource justice”. (14) She describes commoning as an activity, a verb, a movement, a connected mediation, a queer concept that holds out the possibility of different and more hopeful political futures.

What kinds of new architectures, sustainable urban forms, shared infrastructures and practices of social care would emerge through commoning mobilities? How can our own dis-placement become a way of sharing places? How can we work in dialogue with architects, designers, urban planners, humanists, artists and wider publics to create more equitable forms of dwelling and moving, amidst the legacies of racial injustice, climate injustice and mobility injustice?

Mobile commoning is enacted within shared practices of movement, momentary gatherings, and fleeting assembly, for a time, in a place, without owning it, as long as one does not ruin it, lay waste to it, degrade it or take it away from the use of others. It is a kind of mindful movement, based upon forms of solidarity, reciprocity, caring, trust, generosity and stewardship. It is temporally oriented toward maintaining the intergenerational connections between past, present and future in terms of how we move over the Earth: lightly, carefully, with concern for others, and through strenuous efforts of translation and accompaniment across difference

(1) International Association for the Study of the Commons: https://iasc-commons.org/about-commons/.