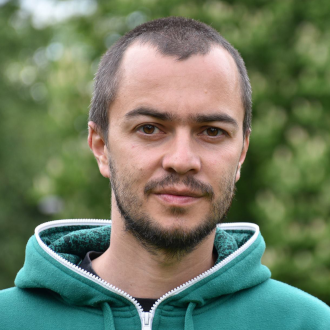 An architect with almost ten years of experience as an urban designer, architect, and curator, he studied at the University of Stuttgart and, in 2017, founded GIFTED_Sofia, a culture hub offering books, music, clothes, and even an exhibition space. He was also director of URBANIK, co-founder of Transformatori, co-founder of Bulgaria’s first digital production laboratory, Smart Fab Lab, which is part of a worldwide network of fablabs (2014), and co-founder of SOCMUS, a virtual museum of graphic design in Bulgaria’s socialist years (2011).

As an artist, he has also worked in typography, design, and street art and, with the German artist Jens Besser, has directed workshops and exhibitions called The Rolling Silkscreen Studio in five Bulgarian cities (2013). Since 2004 he has taken part in several collective exhibitions in Germany, Poland, and Bulgaria and, in 2011, he wrote critical articles for the transcultural research project Urban Report. In 2012 he was co-curator of the Sofía Architecture Week while, in 2014, he headed the candidature for the city of Sofia in the Mayor’s Challenge design competition. He also worked for Sofia’s candidature for the 2019 European Capital of Culture.