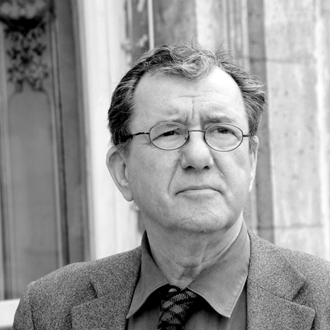 Trained as an architect and urbanist at the Urbanism Institute of the University of Paris (IUUP), today’s Institut d’urbanisme de Paris (IUP). He lectured at the École Nationale Supérieure d’Architecture in Versailles, where he set up the ADROS-UP3 research laboratory, later LADRHAUS. Since 2000 he has been Director of the Paris-Malaquais School of Architecture.

As an architect, he has worked on various projects to transform the relation between the city and the rural world, integrate infrastructures into cities, and address urban mutations. His work includes La Teisseire in Grenoble, a project to demolish and reconstruct 1,200 dwellings, Zenata New Town Master Plan in Casablanca, and the urban plan for Condorcet Campus in Aubervilliers. He is a collaborator, together with Bruno Fortier and Christian Devillers, on the Rheims 2020 urban plan. In 1999 he was awarded the Grand Prix for Urbanism.

He has published numerous books and articles, including Analyse Urbaine (Parenthèses Editions, 1999), Urban Forms: The Death and Life of the Urban Block (Routledge, 2004), and, more recently, Dessin de ville et vie quotidienne (ERU, 2016). Since 2017 he has been editor-in-chief of Tous Urbains.