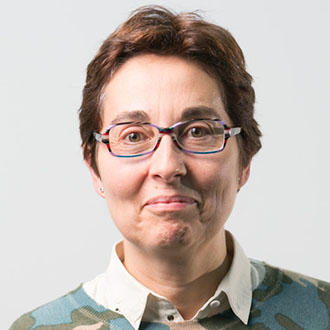 Professor of French Literature and Gender Studies at the University of Barcelona, Marta Segarra is also research director of the Laboratoire d’études de genre et de sexualité-LEGS, at the French National Centre for Scientific Research. She is co-founder of the Centre for Women and Literature, and also of the Women, Development and Cultures UNESCO Chair, as well as being a researcher in the ADHUC (Research Centre on Theory, Gender and Sexuality) group at the University of Barcelona. She was previously guest professor at the University Paris 8 (Vincennes), the Collège international de Philosophie (Paris), Cornell University, the University of California-Berkeley, and other centres. Her research is mainly in the fields of gender studies and sexuality, biopolitics and posthumanism, and cultural studies (literature, cinema, theatre). She has published several books in these areas, among them Teoría de los cuerpos agujereados (Theory of Holey Bodies, 2014 – Melusina), L’habitació, la casa, el carrer (Room, House, Street, Breus CCCB, 2014), Escriure el desig. De La Celestina a Maria-Mercè Marçal (Writing Desire: From La Celestina to Maria-Mercè Marçal – Afers, 2013), and El món que necessitem (The World We Need, with Donna Haraway, CCCB, 2019. She is director of the “Mujeres y Culturas” (Women and Cultures) collection of Icaria Editorial, and was awarded the 2009 ICREA Acadèmia prize for Research Excellence in Catalonia.