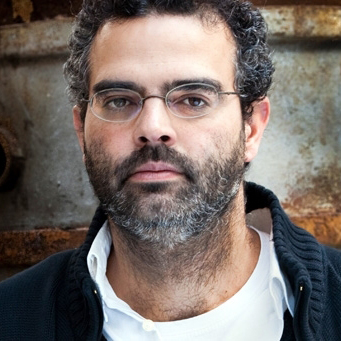 Tavares (Luanda, 1970) has studied Physics and Art and lectured in Epistemology at the Technical University of Lisbon. Although he only started publishing in 2001, he is considered the finest Portuguese writer of his generation and one of the most influential in Europe. He has a very original personal literary world that has been admired by Nobel Prize-winner José Saramago and writer Enrique Vila-Matas, among others. His creations, translated into some thirty languages, range from a tetralogy of “black books” where he aims to investigate the role of Evil, with Spanish editions available of Un hombre: Klaus Klump (Mondadori, 2006), La máquina de Joseph Walser (Mondadori, 2007) and Jerusalén (Mondadori, 2009), to the “O Bairro” series of novellas: the creation of ten texts, all set in the same imagined neighbourhood, which is a backdrop for major literary personalities and is based on the idea of sketching a history of literature based on fictional tales, with Spanish editions available of El señor Valery (Mondadori, 2006), El señor Henri (Mondadori, 2007) and El señor Brecht (Mondadori, 2007); and includes a project that began with Biblioteca (Xordica, 2007), which comprises short fictional texts based on the names of different literary authors. His powerful literary voice, which has cultivated all genres, has led him to win various Portuguese prizes, such as the LER/Millennium BCP Prize (2004), the José Saramago Prize (2005) and the Portuguese Association of Writers’ Prize in the categories of short story (2007) and novel (2011); as well as international prizes and plaudits such as the TELECOM de Brazil Portugal Prize (2007 and 2011), the Internazionale de Trieste (2008), the Belgrade Poetry Prize (2009) and the Prix Du Meilleur Livre Étranger in France (2010). He has recently published in Spain Un viatge a l’Índia (Periscopi, 2013; in Spanish, Seix Barral, 2014)