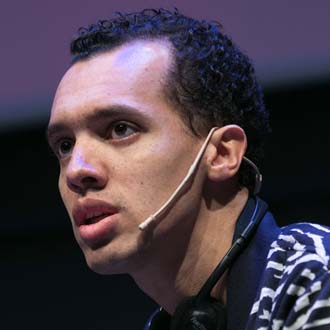 He was born in Burundi in 1982 of a Rwandan mother and French father but at the age of thirteen had to flee the country because of the civil war in Burundi and the genocide against the Tutsis in Rwanda. Once settled in France, he spent his adolescence in a banlieue not far from Versailles where he discovered rap and hip-hop and started to write his own songs as a way of coping with loneliness in his new setting and reflecting on his mixed identity. After studying Commerce, he obtained a master’s degree in Finance and worked for two years in the City of London as an investment fund advisor. However, he decided to leave this career and devote himself to rap, first with the duet Milk Coffee and Sugar and then making a solo debut in 2013 with the album Pili Pili sur un croissant au beurre. His first novel Small Country (to be published by Hogarth in June 2018) became a literary phenomenon in France after he was awarded the FNAC Prize for Fiction and the Prix Goncourt des Lycéens. The book tells the story of a boy who, like Faye, has a happy, peaceful childhood in Burundi until war obliges him to go into exile. In 2017 he released his second rap album titled Rythmes et botanique.