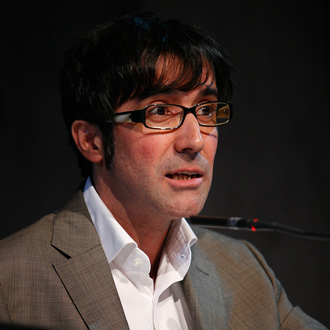 Professor of Urban Geography at Universitat Autònoma of Barcelona

PhD in Geography and lecturer in Urban Geography since 1995 at the Autonomous University (UAB) of Barcelona, where is also director of the Urban Planning Observatory. A specialist in urban and city planning and design of territorial strategies, he has studied the present-day transformation of urban and metropolitan landscapes in addition to working with the Council of Europe on these questions.

He has been a guest lecturer at universities in France, Italy and the United Kingdom and has published texts in these countries as well as in Portugal and Slovenia. He is director of the “Palabra y Paisaje” (Word and Landscape) collection of the publishing house Àmbit, and has worked with the Centre of Contemporary Culture of Barcelona (CCCB) on previous occasions when he directed the “Congrés Internacional Cerdà Postmetròpolis” (Cerdà Postmetropolis International Congress), and also in 2010 when he was curator of the exhibition “LOCAL, LOCAL! La ciutat que ve” (LOCAL, LOCAL! The City to Come). Notable among his publications are: