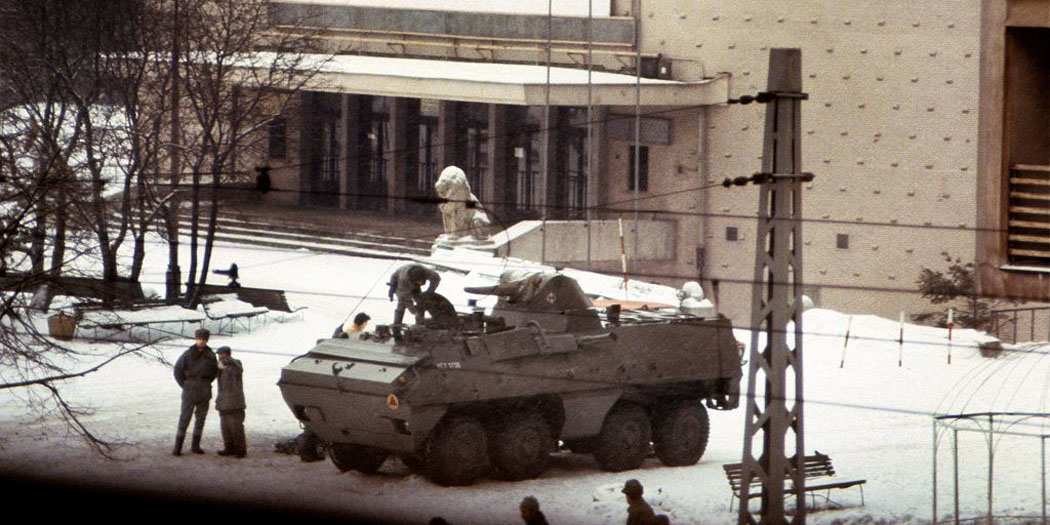 "After the fall of communism, we were first busy destroying hated monuments and spontaneously building the foundations of businesses; it was only later that we took up debates on quality, accessibility, innovation and the philosophy of space."

Do you remember these images? August 31, 1980. Lech Wałęsa, legendary leader of “Solidarity”, who a moment before signed the agreement between the workers’ strike committees and the Polish communist government, is carried on the arms of shipyard workers in Gdańsk. November 9, 1989. Thousands of Germans destroy the Wall, which for over 28 years had divided East and West Berlin. November 27, 1989. A general strike brings millions of people to the streets of Prague; the apex of the Velvet Revolution in Czechoslovakia.

Streets and squares are not only a scene of everyday life. In Eastern and Central Europe in the communist times they provided a background for obligatory May Day marches, military parades and state ceremonies, but also for violent protests and demonstrations. It was in public space, on Wenceslas Square in Prague, that student Jan Palach committed an act of self-immolation on January 19, 1968, to protest against the invasion of the Warsaw Pact armies on Czechoslovakia. It was in public space, in 1981 Warsaw, that photographer Chris Niedenthal took a photo of an armored car and soldiers positioned in front of a movie theater bearing a telling name of “Moscow” and playing Francis Ford Coppola’s Apocalypse Now —a photo that became a symbol of the martial law in Poland.

When Bernard Tschumi wins a competition for Parc de la Villette in Paris and creates a green area, giving it an experimental deconstructivist form, Poland is shackled by the martial law. When Ieoh Ming Pei opens his Louvre pyramid to the public, Eastern and Central Europe witnesses the fall of communism.

This context is worth recalling when we look at the sixteen-year-old history of the European Prize for Urban Public Space and wonder why so few projects submitted by the young democracies have ever been successful in their quest for awards or mentions. To put it simply, after the fall of communism, we were first busy destroying hated monuments and spontaneously building the foundations of businesses —like putting up camp beds as makeshift stalls in streets and squares—; it was only later that we took up debates on quality, accessibility, innovation and the philosophy of space [1].

Many years had to pass since the Autumn of Nations for the differences noticeable within Europe in the way of thinking about the mechanisms of shaping urban space to finally be fading. In Poland, a meaningful change started with the introduction of the 1995 Local Government Act; it removed public space from the sphere of central planning and gave local authorities the power and instruments to manage it. Our 2004 accession to the European Union opened the way to grants from EU funds; in 2004-2007 only, funds from the Integrated Operational Program for Regional Development helped finance over 350 projects of revitalization in historic cities, renovation of historic monuments and improved conditions for the functioning of cultural institutions. In Regional Operational Programs for 2014-2020, revitalization of space, including the development of public space for social purposes, also occupies a major position.

The knowledge and access to funds used to create friendly, open and democratic public spaces in Europe are therefore now more balanced than ever —which naturally is not tantamount to disappearance of all poor and neglected areas. We promote our heritage while looking for new solutions. Sustainability, natural environment conservation and ecology have become bywords in urban planning. More and more often, city residents are not just consultants but also participants and a moving force behind the planning process, and due to participation funds they can decide directly about allocating some sums to particular tasks. Urban grassroots movements also have been gaining force.

It is only rarely that such processes run smoothly. A greater number of participants involved in decisions concerning common spaces means a greater scope of contradictory interests; however, striving after consensus is the very essence of democracy. The situation grows even more complicated in case of multipurpose areas, historic sites and these of particular symbolic content. The most telling example in Poland is a long-lasting fierce conflict over the idea to erect a monument commemorating the President of Poland, the First Lady and ninety-four other persons killed in the 2010 air crash near Smolensk, in Russia. The conflict, focused around the question of locating the monument in front of the Presidential Palace situated by the Royal Route [2] in Warsaw’s historic heritage area, that is in a very specific site in public space, reveals strong political divisions and leaves no doubt as to the importance we ascribe to symbols.

"An ideal public space is a zone of free, universal access, which is to say open and without any excluding fences or walls. (...) In being open to everyone, public spaces are able to distribute resources, power and imaginaries and, in doing so, make the city more democratic", writes Judit Carrera in the book Europe City: Lessons from the European Prize for Urban Public Space, published last year. And she adds: "If the city has been always a potential setting for the peaceful coexistence of strangers, today’s public spaces face the challenge of welcoming, safeguarding and strengthening the growing pluralism of European societies."

The most original example of space created along the lines of such thinking is "Superkilen", a project carried out as a partnership program of Copenhagen authorities and Realdania association. This innovative public space —designed by BIG, Topotek1 and Superflex—, furnished with urban objects originating from several dozen countries, was created thanks to a collaboration effort of an ethnically diverse community.

Will the Europe of today be still able to meet such challenges? Right now, when I am writing these words, a group of immigrants wielding placards pronouncing “Where is your democracy? Where is our freedom?” protests against the demolition of an illegal camp in Calais, at the entrance to the tunnel connecting France and the United Kingdom. The United Nations High Commissioner for Refugees warns that Europe is on the brink of a humanitarian crisis, and the European Commission has toughened its stance against these migrants who are not in direct danger of war or persecution in their home countries. More than 1.5 million immigrants have come to Europe over the past eighteen months and, although it does not seem much when compared to 500 million inhabitants of Europe, the problem keeps on growing. The EU countries seem to be unable to find one common way that would help them deal with the immigration problem. “United in diversity”, the European Union motto first introduced in 2000, or the year when the European Prize for Urban Public Space was established, has never before seemed so imperiled.

Acceptance of diversity, openness to other cultures and customs, tolerance for a different way of thinking developed over years have been yielding to all sorts of fears, and not just of terrorist attacks, because one should remember that these are nothing new in the history of Europe. A feeling of security is, without doubt, one of the essential elements necessary for the functioning of public spaces as sites where meetings happen, bonds form, ideas are exchanged and freely expressed. The political situation in Europe has not been so complicated for a long time. How will it influence the shape of public spaces?

[1]: Naturally, it does not mean that Jan Gehl’s Life Between Buildings remained unknown in this part of Europe (even though it was not translated), or that parks, streets and squares had not existed before. It only means a different starting point and other priorities in the period of transformation from planned to market economy.

[2]: The Royal Route in Warsaw is a former communication route that led southward from the city's Old Town. It now comprises a series of connecting Warsaw streets that feature a number of historic landmarks. The route, with other portions of Warsaw Old Town, is one of Poland's official national historic monuments (pomnik historii) as designated September 16, 1994. Its listing is maintained by the National Heritage Board of Poland.