Tirana’s Skanderbeg Square and Its Civic Dimension: How One Public Space Can Save Another 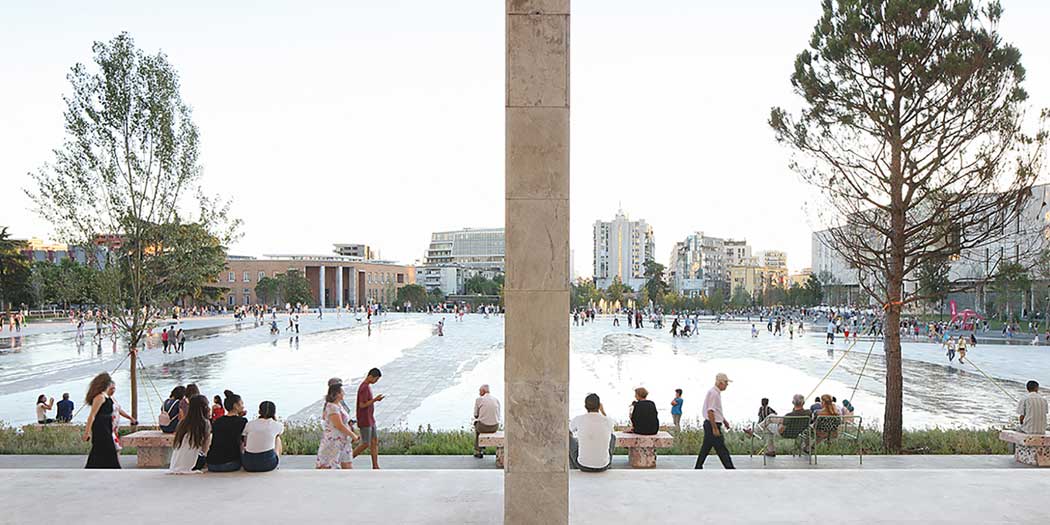 Gjergj Bakallbashi—who nominated Skanderbeg Square as a candidate for the 2018 Prize—describes the project as one that is capable of generating a different model for Tirana and inspiring other potential squares.

Skanderbeg Square (Sheshi i Skënderbeut) in Tirana might seem, at first glance, like one of those squares that could have been built before a city was born, when land was ample and abundant. On a normal day, its surface gleams with tiles of pastel colours surrounded by Mediterranean-steeped bushes filling the air with amazingly warm scents, creating a perfumed shrine of fresh, moist, salty, bitter, and sweet aromas from plants bathed in almost year-round sun. No wonder it is a heaven of conviviality and conversation for the people of Tirana. Yet, it is also a close reminder that it was built in the era of “drab, concrete boxes”, in an era when open land is scarce. It is also, then, an open-air museum of Tirana’s architecture, revealing the different strata of the city’s history. But, more importantly, it highlights the ancient layer characterising every Mediterranean town, namely that of the people’s agora, where only people reign and affect the shape and life of the city. As Elias Zenghelis has rightly pointed out, only the Mediterranean sun and the crowds of people filling up space add life to Tirana’s otherwise drab, concrete boxes.

When public spaces are designed with a degree of primitivism, as is the case with Skanderbeg Square, they tend to showcase attractive elements to an astonishing degree. Two are exemplary in this regard: a) the aesthetics of the square, formed over the years, giving it its natural look; and b) the civic dimension, which has also taken shape throughout its lifetime, making it a place where youngsters go to meet each other, sitting on benches and soaking up the sun, where families go walking hand-in-hand, and elderly people stroll around with beautifully crafted rosaries in their hands. It is this second aspect, the practice of free exchange in the square, the ability to interact on equal terms with someone who is not from your neighbourhood, not from your school, and not from your village, which generates social habits of self-expression, and stimulates an appetite for the world.

There was also a time, unbeknown perhaps to many foreigners, when the square was truly splendid. Walking through Skanderbeg square, to see and to be seen, was a ritual of finesse, an act of nobility. People took pictures of their presence there, even tired long-distance travellers eating modest homemade picnic lunches on the kerbs around its perimeter. It was like being present at the Crossroads of the World. An enduring feeling of elation. All that, just because of being in Skanderbeg Square.

One cold but sunny November day a few years ago, when I was head of the office of Urban Planning and Architecture in Tirana, I received a call from a group of architecture students and professors from Switzerland who were investigating the ways in which people use and fill public spaces. In Switzerland, they told me, public space is underused. One of the pleasures of the square, for anyone who is nostalgic for some unsung habit of basking in the splendour of public space, is that it allows you to share its splendour. Naturally, I took my guests to walk around Skanderbeg Square. It looked different from its current appearance, but people were sitting everywhere: in the “forest” between the National History Museum and the Bank of Albania; along the colonnade of the National Opera and National Library; in front of the Rustem Pasha Mosque; and next to the Clock Tower. A group of little children were flying kites in the green space around the Skanderbeg monument, and a birthday cake was nicely positioned in the middle of a picnic blanket nearby. Kites flew above the statue of Skanderbeg wearing his goat’s-head helmet, and children circled around him on his rug of green grass. Skanderbeg seemed to be smiling.

My guests marvelled at the ease with which people used the many corners and islands of the square. There were no organised ceremonies or events, and yet the square was full of people. This came about by habit, learned through daily experience, in a setting of ever-shrinking corners of public space. Here, in Skanderbeg Square, this interconnectedness was on display for all the city inhabitants, visitors, and tourists to behold. As my Swiss guests quickly noticed, Tirana’s inhabitants rely on these spaces for a much needed human connection across income levels, age groups, families and friends, and not bounded by the physical limits of cafes or homes.

Fast-forward to the current layout of Scanderbeg Square. Its outwardly impressive feature is that it has retained its old-time identity, that of being a social institution, of being “a place of politics”, just as it was in its prime, crowded with opinionated people, uninhibited children, all dressed up in their Sunday best, having a wonderful time in their “escape zone”. The re-creation of these daily social habits in the square now is truly infinite.

The evident grandeur of Skanderbeg square today also reflects, with startling specificity, the reality of public space around it. In Tirana, the struggle for public spaces is real and takes on particular pathos. You do not need to be an architect to observe this fact. Many Albanians are now proud and conscious of their new square, realising at the same time the “otherness” and “difference” once you step out of it. Recently, I met a man who, with his grandson on roller blades, was admiring the new square but simultaneously lamenting the fact that his old age does not allow him to walk all the way there too often. He wished he had a smaller square in his own neighbourhood so that he could watch his grandson skate. It occurred to me that his wish is so basic, yet so vital for the social interconnectedness which Skanderbeg Square promotes.

What, then, of the vision of the square as an arena of civic engagement, a means, a place people can go to and shape the idea of the society itself? Skanderbeg Square can take on that role; it can be the generator of a different Tirana; it can save other potential squares in the city. The model of a central square can only be wholly successful if it opens the way to a model of the neighbourhood square, which belongs to more people, which connects more people, and not just the privileged few living nearby. One fresh example that comes to mind is that of a space of 2.4 hectares in Yzberisht, a congested neighbourhood in Tirana, which was once zoned as a recreational and educational area, but has now been re-zoned for residential development. This means that 55,000 square meters of new buildings may rise up there, in what has been open public space. Not only is the healthy future of 40,000 inhabitants at risk but so, too, is our postcard image of Skanderbeg Square. Losing these other public spaces will cause the eradication of the symbiotic and mutually beneficial relationship between them and their inhabitants. Without the other spaces in the rest of the city, Skanderbeg Square risks becoming a Museum of the History of Public Space in Tirana, serving as a reminder of the city that created it, rather than as a celebration of its heart and soul, the people.

Indeed, Skanderbeg Square belongs to a network of spaces that is as essential as the square itself. It is integrally connected with the activities taking place in all the smaller but critically important public spaces elsewhere in Tirana. For the network to be “being-at-work-staying-itself” (in Aristotle’s words), then all its “nodes” must be healthy and oriented toward the monumental Skanderbeg Square. A collapse of the network will make Tirana lose the very qualities that my Swiss visitors admired and envied about our present Skanderbeg Square, namely its ability to nurture a vibrant, interconnected life in a network of public spaces which, I believe, is the first principle of the more appealing forms of organic public spaces.