The Role of Public Space in Post-COVID-19 Cities 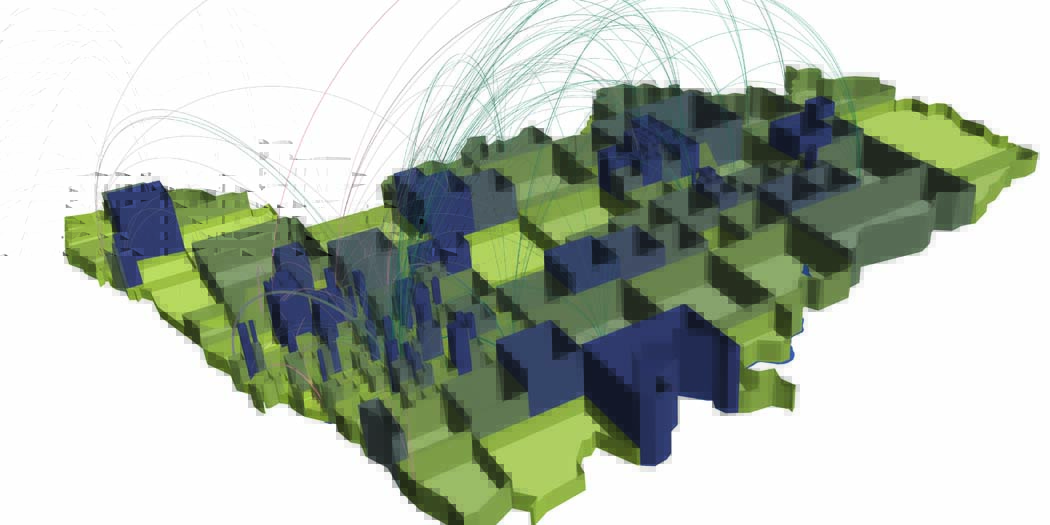 It is a truism that we are living increasingly virtual lives. Since 2020, most of our face-to-face meetings have been replaced by calls on Zoom or Teams. More generally, the practice of smart working, which some parts of the population had already tried out before the COVID-19 crisis, has been adopted at an unprecedented rate, and is expected to keep up its momentum in the future.

As a result of this shift, pundits have been speculating on long-term changes, with many even predicting the imminent death of the city and the possible death of the office. (1) I, however, am convinced that such scenarios will not materialise, for multiple reasons, mostly regarding the structure of our social networks, which depend heavily on interactions in physical space.

It was sociologist Mark Granovetter who, in the 1970s, studied the concept of “weak ties” and “strong ties”. (2) “Weak ties” refer to relationships between casual acquaintances, as opposed to the “strong ties” we maintain with people in our inner circle, a close group of friends. As Granovetter put it, “the degree of overlap of two individuals’ friendship networks varies directly with the strength of their tie to one another”.

A healthy social network needs both strong and weak ties. While the former provides us with a sense of security and stability, the latter is particularly useful for connecting us with a broader range of people and otherwise unlinked social circles, thereby introducing us to new ideas, challenging our preconceptions, and making us aware of the wider world beyond our immediate confines. In other words, the weak ties are an essential pillar of a healthy civic life, building trust, empathy and mutual understanding among people of different beliefs. Both before and during the pandemic, in our laboratory at Massachusetts Institute of Technology (MIT), we embarked on a research project with the objective of measuring people’s communication networks. (3) We collected anonymous data from the Institute’s email servers. Our initial analysis showed that, during the lockdown periods, students, professors and administrators seemed to exchange messages among smaller, tighter groups. In other words, it suggests that when we abandon physical space and rely heavily—if not exclusively—on virtual channels of communication, the weak ties are duly undermined. And this becomes more and more exacerbated the longer we continue to desert our shared physical places.

Connecting only with our tightly-knit communities is concerning, as we have seen in broader studies on online interactions as they have evolved over the last few years. Virtual platforms—and the algorithms that reinforce them—feed people with materials that confirm our existing preferences and preconceptions. As a result, we tend to cherry-pick what we see on the Internet, we speak exclusively with people close to us on FaceTime and WhatsApp, and we filter out any undesirable content in the process. Such a move towards targeted online socialisation might even have been a contributing factor in the increasing political polarisation we have experienced in the last few months, as the negative effects of the “removal” of physical space ultimately spilled out from the digitised sphere into the real world. As designers, we cannot help but ask ourselves: what can we do to reintegrate physical space into our lives, making it more relevant to the fast-changing social context? I would single out three adjacent environments which we believe should lead the charge.

The first is the space of the office. Companies would be well-advised not to eschew offices entirely, (4) both for their own sake—new, innovative and collaborative ideas are essential to success—and also for the wellbeing of the societies in which they operate. Instead, they could allow employees to stay home more often, while taking steps to ensure that any time spent in the office is indeed conducive to establishing weak ties.

This could mean, for example, transforming traditional floor plans (designed to facilitate solitary task execution) into more open, dynamic spaces, which encourage the so-called cafeteria effect (there is no better way to establish weak ties than sharing a table for lunch). More radical redesigns may follow, with designers working out how to generate serendipity, such as through choreographed, “event-based” spaces.

Secondly, there is the ground-floor real estate. Traditionally reserved for local retail networks, as well as food and beverage businesses, the “ground floor” had long been a focal point of urban social life. Nevertheless, in recent decades, the established brick-and-mortar model in cities has been destabilised by the rapid transformations in commercial trends—first shopping mall retailing, and now e-commerce. Coronavirus and the restructuring of our working habits have dealt another blow to many businesses, among them restaurants and bars, which had been a driving force of the domain’s revival after the 2008 financial crisis. All around Europe, as well as in cities from Boston to Tokyo, urban centres are troubled by the “ground floor” problem. Can we really afford to move away from such a historical institution? The former deputy mayor of Paris recently told me: “Let’s think of the richness of Parisian urban life. It would never be possible without the myriad of commercial activities that fill the streets.” This loss would impoverish not only the economy, but also our social and cultural foundations.

In essence, street-level premises assume the historical role of facilitating meeting and civic dialogue, advancing the reach of public space while blurring its boundaries. While it is important to dedicate parts of the space to support existing commercial activities, we could expand its use to accommodate various neighbourhood initiatives. I am thinking about co-working spaces, fab-labs, non-profit associations, youth entrepreneurship hubs and urban agriculture and volunteering centres. Such a strategy of revitalisation would open the ground floor up to a broader group of stakeholders, making it an intermediary between neighbourhood communities and the city at large.

Achieving these objectives requires the involvement of both local and international authorities. In the European context, many municipalities’ regeneration programmes hinge on funds from the European Union’s NextGenerationEU plan. (5) Local governing bodies also hold great influence when it comes to updating the regulatory framework, granting higher flexibility to different projects. The more agility afforded by public-private partnerships, the more society-benefitting collaborations will be born. The city of Milan is one of the forerunners in this regard: the redevelopment of the neighbourhoods Porta Nuova and Milan Innovation District (MIND) emphasises the idea of bringing the public together on the ground level. (6) Digital tools, from sensors to the Internet of Things, could offer citizens novel ways of communicating in the city of tomorrow.

Finally, we should focus on public space in its own right, insomuch as it is accessible to anybody and everybody, without restrictions. A stone’s throw away from ground-level real estate, public space was born with a pronounced social mission. Through its unique characteristic, it (inevitably) cultivates weak ties in such a way that is barely possible online. Streets, parks and squares are venues of togetherness, the only places where all (or at least most) of a society converges. Regardless of their backgrounds, citizens have no choice but to share the same pavement, they are all forced to witness homelessness, they must all jump to dodge a bicycle. In this contested, conflicted space, realities we would rather avoid are on full display, and the unsettling quality of public space is exactly why we need it.

The Senseable City Lab at MIT conducted some research in collaboration with the KTH Royal Institute of Technology in Stockholm. (7) Through geo-tagged Twitter data, the research team analysed where and when individuals of different backgrounds meet one another in the Swedish capital. Their findings reveal how the layout of the city is crucial to overcoming ethnic and socioeconomic isolation. Some of the city’s neighbourhoods are more diverse than others, but in each of them, squares and other forms of public space always serve as the primary backdrop for inter-group communication.

Such a process is not always idyllic. For as long as public spaces have been a site of social mixing, they have also been a battlefield for political conflicts, and a breeding ground for tide-changing social events. From the French Revolution to the Arab Spring, disillusioned populations have taken to the streets, the one place where they cannot be ignored. Last year, tens of thousands of protesters, all across the globe, managed to capture the world’s attention in the wake of the Minneapolis police killing of George Floyd, despite the raging pandemic. (8) The protests were overwhelmingly and admirably peaceful, despite police-state tactics and fringe vandalism in US cities like Portland and Washington D.C. Similar moments in the past were marred by violence and repression. Elsewhere, the strength of weak ties was vividly demonstrated by strangers in Hong Kong during the 2019 protests, who supported each other both practically and emotionally while marching on roads usually crowded with automobiles. (9)

When we re-emerge from the distressing lockdowns, we must encourage people to re-populate public spaces by highlighting them as venues for understanding and reconciliation. The flawed spaces are those where people were prevented from interacting on an equal footing, restricted by residential segregation and discriminatory law enforcement. In order to ensure what French sociologist Henri Lefebvre called the “right to the city”, (10) we must begin by setting the city right.

Inclusive policies are the first step in empowering citizens to engage with one another. In Stockholm, one of the most effective social integrators seems to be the KTH University district, upon a small hill in the northern part of the city. Diverse students and staff, who reside all over the greater metropolitan area, come together in a shared physical campus, and in so doing they create an experiential, intellectual and emotional community. Without openness to dialogue and confrontation, even the most inclusive public spaces have limits. From the office to ground-level premises and public venues, physical space is an invaluable resource to help the world get back on track after the painful coronavirus outbreak. To maximise its impact, we must provide every citizen with the possibility of expression and collaboration, and thus collectively construct a social discourse. The COVID-19 crisis has shown that we have the tools to stay connected, be it from a mountaintop or our kitchen table. Our challenge today is to leverage physical space so that we may regularly descend from our isolated summits. This means pursuing the rebirth of physical space in such a way that enhances its greatest asset: the ability to nurture all the ties that bind us together.

(1) Cairncross, Frances, The Death of Distance: How the Communications Revolution Will Change Our Lives, Cambridge (MA): Harvard Business School Press, 1997.

(8) “What We Know About the Death of George Floyd in Minneapolis”, The New York Times, New York, 12th January 2021: https://www.nytimes.com/article/george-floyd.html.