«The Political and Economic Dimension of the Crisis» 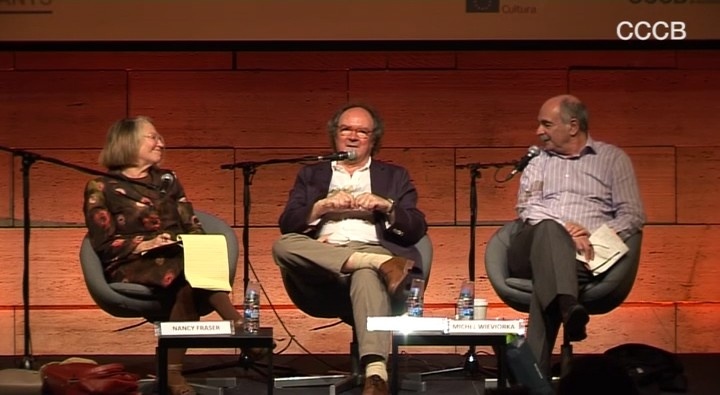 Nancy Fraser and Michel Wieviorka met at the CCCB to talk about the consequences of the economic crisis which has been dominating the news for the last few years.

The American critical theorist Nancy Fraser and the French sociologist Michel Wieviorka met at the CCCB to discuss the consequences of the economic crisis which has been dominating the news for the last few years. The debate was introduced by the journalist Josep Maria Martí Font.

Fraser and Wieviorka gave a brief outline of some general ideas in order to structure the debate that followed, both between the two speakers and with members of the audience. Wieviorka opened the discussion by analysing the political situation in Europe from the local standpoint, taking the results of the European elections of 22-25 May as an indicator. He reminded the audience that, from the outset, Europe has not been an economic project but a moral one, an ethical position in which the economy is a means for attaining these ethical and moral goals. He warned, however, that many people feel that the economic dimensions of Europe are now cut off from ethical and moral concerns, and emphasised that the original idea is now “very weak”. Europe, he said, is not democratic but technocratic and bureaucratic. Fraser’s complementary approach was to evaluate the present-day situation of Europe as a way of opening up the discussion to a more global level. She believes that the situation in Europe is merely a manifestation of what is happening around the world: a crisis of public power itself. This state of affairs, she stated, is evident in the diminished capacity of the public powers to find solutions to problems and their loss of legitimacy in the eyes of citizens who are witnessing time and time again how their strategies are geared to maintaining the stability and power of the private sector.