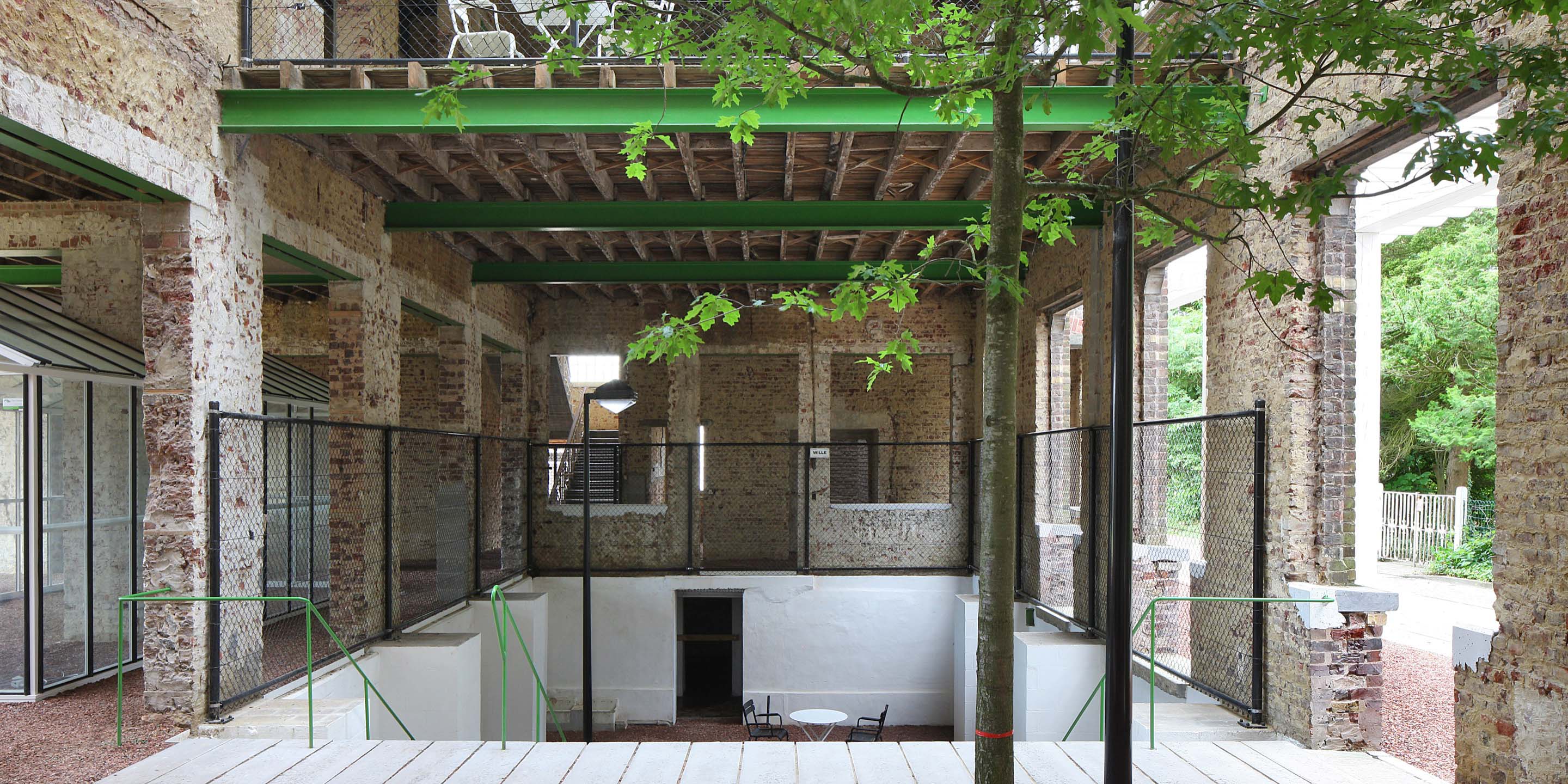 Special Mention in the 2018 Prize, Silver Lion at the 2018 Biennale di Venezia and finalist of the Mies van der Rohe Award, this building testifies to the power of projects that skillfully combine the existing fabric with new elements. It also provides an argument for collective work involving investors, designers, users and experts: in this case, a collective specializing in a discourse on art, architecture and urban planning.

The Psychiatric Center Caritas was built on the outskirts of a small Belgian town Melle at the beginning of the 20th century. The original complex consisted of freestanding villas/pavilions scattered over an open gardenlike area. From the 1950s on, the pavilions, considered to be obsolete, were gradually replaced by buildings better suited to main therapeutic trends of the time.

The process of destroying the historic villas went on, and was halted only at the beginning of the 21st century, when a newly appointed director of the Center entered into collaboration with BAVO collective. It was decided that a suitable design for this place could be best achieved by combining philosophical, therapeutic and architectural aspects in an open discussion among patients, doctors and designers. The creators attached much value to the use of all kinds of individual experience and to the strengthening of the local communal feeling.

The debates made it clear that such a process was leading to the creation of something more than just new architecture. Architect and philosopher Gideon Boie (BAVO), who worked on the concept, said that „Halting the demolition process and redeveloping the ruin-like Saint-Josef pavilion into an monumental outdoor structure started to function as a pars pro toto for the psychiatric centre of the future”i. Patients took part in drawing first sketches. When the board gave its consent, an architectural competition was announced in 2015, won by architecten de vylder vinck taillieu.ii

According to their concept, the building was to be preserved in its semi-demolished form. A fragment of the roof was dismantled, though the timber frame stayed in place; partition walls were partly pulled down; floors were removed here and there; some windows at the ground floor level were disassembled in order to provide free access. On the walls, only patches of plaster were preserved. Trees were planted and some other plants sown; street lamps were installed. All this intensified the feeling that a historic building has become also a public space. Glass cubes/greenhouses introduced on various levels have made the impression of spatiality more profound; they also play a functional role of intimate, separate though safely transparent meeting places.

Naturally, such a structure can serve many practical purposes, but its creators insist that questions about its function are not that important. What’s important is “opening the door”, or “invitation to take care of the openness in the heart of the psychiatric campus” iii. This place for more or less formal meetings negates exclusion, which is a traditional encumbrance in institutions of this kind.

Let us also stress the symbolic aspect: the pavilion as a material and spiritual testimony, a record of the history of the psychiatric center and changes it has undergone. Employees, physicians and patients cannot remain unaffected. The Polish philosopher Roman Ingarden described creative processes in the following way: “And when … we create or participate in creating new works of art, new laws, new social or moral ideals, new history, new machines and instruments, all this … impresses itself upon us. … We can no longer live and be as we were when they did not exist”. iv

It is hard not to succumb to the charm of the building, and not just because of the architectural composition of the resurrected pavilion. A specific atmosphere of calm and timelessness, proper to places intended for healing or contemplation, makes one think of the 18th- and 19th-cent. park layouts, where real or fake ruins were to appeal to individual and collective memory, move to reflection on the passing time.

It is worth noting that a permanent ruin is an eternal subject of conservators’ debates. Following John Ruskin, in the 19th century the focus was on authenticity excluding all intervention; nowadays the acknowledgment of the inseparability of structure and landscape has become a major aspect. Viewed from such a perspective, the adaptation of the historic villa in Melle is a step forward, since the building seems to draw the landscape inside and thus merges with its surroundings ever stronger.

The building and the outside space have become one.

ii http://www.architectendvvt.com/news 27/08/2015 - PC CARITAS : Happy to announce to have won the competition for PC CARITAS in Melle. Regarding a new future for an old history of one of the villa houses on the site, challenging a possible rethinking of care.