In the Green City 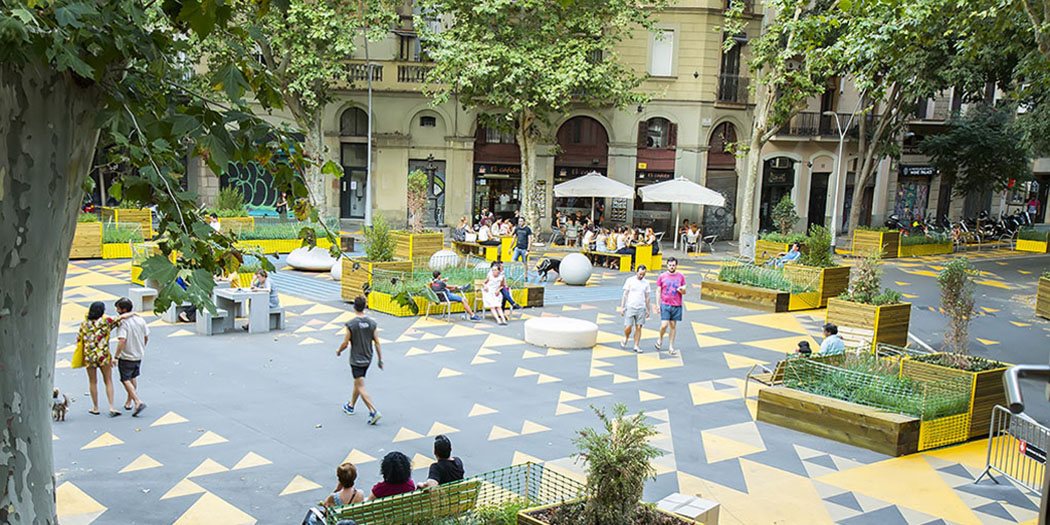 Reducing the number of cars is essential for this reconquest of space, because the less tarmac roads there are, the more land there is for planting.

For the first time in history, there are now more people living in cities than outside of them. In just a few decades, waves of emigrants have settled in urban centres, leading to more cars, noise, rampant CO2 emissions, the rubbing of tarmac, and cables, to the extent that countless city designs have been rendered obsolete. This means that thousands of cities have become unhealthy and, hence, unsustainable. As such, changing the shape and the idea of these numerous large hubs of planetary contamination must be, and apparently is indeed becoming, a global priority.

Many experts on urban space point to the compact, green city as the ideal model: compact because it favours agile mobility, and discourages buildings from sprawling over many kilometres; and green because high-quality air and walkways are essential for the thousands or millions of people who congregate within their tightly-packed perimeters. Moreover, climate change, and the recurring alerts about environmental pollution, stress the need for urgent action. But how can we quickly and effectively revitalise such hypercomplex structures? How can their greenness be multiplied?

Tactical urbanism is providing creative solutions in highly specific and clearly delimited spaces, but the current emergency requires interventions that are as homogeneous as possible, so that the change is systemic, and not isolated. And it must happen quickly. It might seem counterintuitive to call for the same spirit of “speed” that has brought us to the brink of collapse in the first place, but there really are viable green solutions out there, ready to be implemented. And they’re not just slapdash initiatives: many have been in development for years, and all that’s lacking is the will to carry them out, to the very end.

Phenomena such as the present pandemic, the evidence of the effects of climate change and the increasingly obvious mass mobilisation in favour of revamping certain models, have all, in a very short space of time, brought about schemes and mechanisms that had hitherto only been deemed a possibility. Hence, in my home city, the slogan has gone from Barcelona, posa’t guapa (“Barcelona, time to look nice”) to Esto no es un simulacro (“This isn’t a dummy run”); in practical terms, the city’s Department of Parks and Gardens has since hired biologists to replace managers who, until very recently, would select metropolitan plants and trees based on their attractiveness. These changes are gradually being replicated in other cities around the world, where there appears to be growing acceptance that it’s high time for local plants, because, among other reasons, native species adapt better to their own environment, they last longer, consume less, and help pollinate their surroundings in keeping with life’s own natural cycles.

In order to manage these green issues, we must now, at long last, begin to trust certain scientists who have been overlooked—and even cast aside—by the automobile empire, which has managed to impose its man-made universe. Public opinion has capitulated to machines, thus sidelining plants, animals, and the whole non-human natural world, all of which has become the alternative. Today, the aim is not to do away with cars, but to claim back a sizeable amount of the space we’ve given to them, so that we might, among other things, breathe in a nature that is cleaner and closer to us, while also refamiliarising ourselves with “green” words like wild rose and broom shrub, swift and kestrel, hackberry and jacaranda.

Naming one’s surroundings is what defines the imaginary, and the new approach implies that we should be able to recognise the names of plants, not only the names of the latest convertible cars. This revival of words concerns the very people who have been terminologically relegated, because of car fever, to the condition of pedestrians. Pedestrian: “a person who walks in a public thoroughfare”. The notion that the city is inhabited by pedestrians has flourished, in far too many fields of thought. Some say, “we pedestrians are…”. In other words, they agree to define themselves in terms of their relationship with the street, instead of as a member of the wonderfully diverse whole that is a city, where such people were originally called “citizens”.

Rescuing the citizen from the depths of the pedestrian pigeonhole is a philosophical aim. So is restoring to society professionals like biologists, zoologists, anthropologists and so on, who have long been shunted into eccentrics’ corner, even though, as analysts of organic life, they seek to communicate their knowledge about the links between distinct living beings, and how these connections are the key to life. That is, a healthy system is based on mutual relations of dependence, while the current car monoculture upsets the balance of the ecosystem. Also, they tell us that weeds are good.

As such, the new push for urban greenness is beginning to ditch weedkillers and mowers, encouraging us to appreciate the benefits of weeds instead. An English-style garden lawn simply doesn’t attract as much biodiversity as a wild broom shrub. If we are to survive healthily, we must let other beings have some freedom.

Botched-up, temporary fixes are also being replaced by increasingly comprehensive actions that put the long-range plan before immediate solutions, no matter how spectacular such a patching-up can be. In a Texas city, for example, they tried to counter soil erosion (in land contaminated by chemical spills) by means of Japanese trees called kiris, which can absorb 21.7 kg of CO2 each day, duly transforming it into 6 kg of oxygen. As an emergency measure, it may seem acceptable, but the kiri is only really an artificial patch: if anything, it has distracted from the true matter at hand, i.e. the broader structural change the city needed.

Greenness has to be accepted as a whole, not as a trendy quick fix. When the right greenness is located in the right places, the city “blooms”, because green begets green. The greener there is, the more of it we want. But it has to be there in the first place.

Reducing the number of cars is essential for this reconquest of space because the less tarmac roads there are, the more land there is for planting. And for walking, playing and relaxing. As more people slowly realise that this is not a dummy run, the numbers of urban gardens are rising. Furthermore, some people are discovering green rooftops as well: besides creating a cover that guarantees thermically insulated buildings in winter, and coolness in summer, they also act as sound buffers.

The strategy of filling any free space with grass, trees and plants (however small said space may be, from ditches to parterres), is creating a mesh of microclimates that reduce the heat island effect: looking at inner-city Barcelona, the temperature can be up to 8ºC higher there, compared to outlying areas. And the presence of plants becomes even more crucial when we realise that Barcelona went from having just five nights per year with temperatures above 25ºC in 2016-17, to 21 such muggy nights by 2020, prompting experts to replace the term “tropical night” with “torrid night”.

An abundance of trees also creates corridors for animals, which can then cross the city to reach other landscapes, thus claiming back routes that were previously out of bounds for them. One example is the Collserola mountain range, where the sprawl of houses and residential estates has gradually blocked off the natural exits: these routes were used by various animals, including badgers, which, for some years now, have not been able to make their traditional moves to neighbouring mountains. One way to avoid these obstructions is to incentivise the spread of green by means of legislation that bans the construction of more buildings, and even demands that some are demolished.
The presence of animals is the acid test, the one that defines the extent to which we either feel part of an animal “family”, or aspire to go back to the navel-gazing of our species, as if we could manage without the others. The movement of other beings, and the smells and sounds they produce, all stimulate our senses, allowing us to experience our humanness more fully. We only need to think of children: how do we want them to manifest their “humanness”? In what kinds of cities do we want to educate them? One of the best things we can do for them is to let them hone their instincts with a range of green options that surround them every day; for example, outlining street maps where they can walk by themselves, paying attention to far more than just cars and traffic lights.

There are municipal regulations and architects who are now busy working to get more animals moving around the city, and encouraging many of those that left to come back and nest, and seek refuge in the places they once inhabited. Hence, buildings are now being designed with certain angles and crevices that offer shelter to birds, while streets and avenues are being planned with roaming squirrels, cats and mice in mind.

Gardens, rooftops, green corridors, weeds, buildings with well-designed nooks and crannies, as well as many other decontaminating options, are starting to arise in cities designed to boost the kinds of mutual influences that multiply green impact. The greatest challenge will be how to integrate it all seamlessly, and how to ensure that emissions caused by mobility don’t undermine the achievements. We already have some very good news in the form of a specific model that has proven to be effective, namely the superblock.