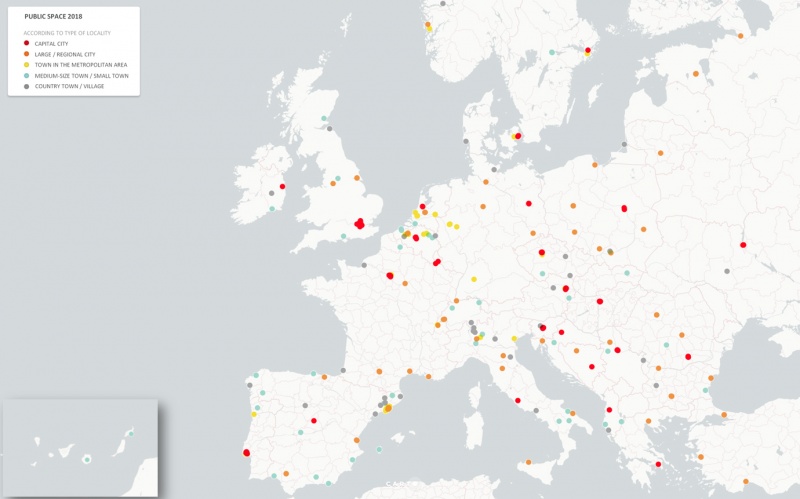 Entries for the 2018 Prize combine to offer an outstanding representation of cities which endorse public space as an essential aspect of urban improvement.

A total of 279 projects from 179 cities have been entered for the tenth award of the European Prize for Urban Public Space. This spread of public space initiatives across the length and breadth of the continent is one of this award’s remarkable features, as is the diversity of the types of towns and cities represented.

Capital cities like Lisbon, London, Bucharest and Moscow, accounting for about 30% of the total, are prominent and so too are regional cities including Barcelona, Rotterdam and Plovdiv, with a similar share. Lisbon and Barcelona are the two best represented cities with 14 and 15 projects respectively.

Populations from within the metropolitan areas of European cities also have a considerable presence, while 25% of the entries are from medium-sized and
small towns and villages.

These results suggest that efforts to recover and create public spaces are not only occurring in capital cities and on a large scale but that issues related with favouring places for citizen coexistence, more equal and sustainable mobility, and surroundings allowing access to spaces with natural values are of a transversal nature and concerns shared by urban environments of all kinds.

Data concerning cities gain more substance when seen in relation to the typologies of the works presented. Noteworthy here are squares, pedestrian areas, parks and gardens, the perennial and most common themes of urban public spaces. However, ephemeral installations, frequently with an artistic component, and projects highlighting the memory of places and their historical urban heritage are also immediately apparent in their significance.

The final significant feature is that this year too, as in previous awards of the Prize, there is an increase in the number of grassroots projects with significant participation by local citizens, together with entities and platforms which are active in the transformation of cities.