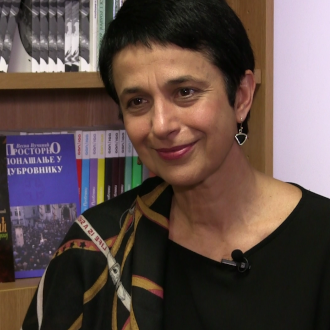 Urban anthropologist. Member of the Prize’s Board of Experts.

A lecturer in the Department of Ethnology and Anthropology at the University of Belgrade, her areas of research are urban spatial behaviour, socioeconomic and cultural interchange, and the revival of religious festivities in the post-socialist societies of southeast Europe. Her work from 2000 and 2010 towards developing the International Association for Southeast European Anthropology (InASEA), both as a member of the Executive Committee and as its president, led to her engagement with the World Council of Anthropological Associations (WCAA), of which she was president from 2014 to 2016.

As a writer, she has contributed to many books and has written in the media on questions of anthropology and urbanism, as well as publishing studies like the chapter “The Past and the Future of Ritualized Sociality in Open Urban Spaces. The Corso in Southeastern Europe” in The Routledge Handbook of Anthropology and the City (Taylor&Francis, 2018). Her other works include her thesis Official Debates on the Use and Value of Urban Land in China’s Largest Cities, 1979-1986 (Harvard, 1986), her study of the ways in which urban planning affects everyday and ritual use of public space, Spatial Behavior in Dubrovnik: An Anthropological Study of a City with Orthogonal Structure (Belgrade University, 1999), and her reflections, based on decades of work, compiled in the book Anthropological Fieldwork: From the Normative to the Experiential (Belgrade University, 2013).