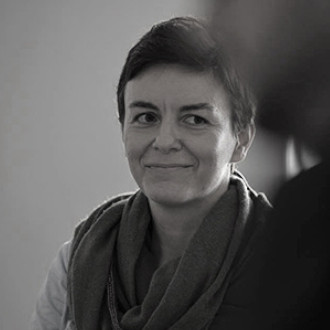 Architect and writer. Member of the Prize’s Board of Experts.

An architect and lecturer in the Department of Theory and History of Art in the Prague Academy of Fine Arts, she has a master’s degree in Architecture and Urban Culture from the Barcelona School of Architecture (ETSAB), and a master’s degree in Architectural Design and PhD from the Fa STU Faculty of Architecture in Bratislava. Her academic field is contemporary urban culture in post-socialist cities of the Czech Republic and Slovakia. She is co-author of the books Bratislava, Atlas of Mass Housing (Slovart, 2011) and Modern and / or Totalitarian in the Architecture of the 20th Century in Slovakia (Slovart, 2013), and has published other articles and texts.

She is founder and editor-in-chief of the fanzine Ciudades Fake / True Stories, a tool for observation, learning, and criticism of the parallel realities in Central European cities and urban planning in Eastern Europe before and after 1990. In 2014, the fanzine was part of the collection of the international exhibition “No Perfect Schools So Far”, of which Elias Redstone was the curator. She has also worked in several projects of experimental editing and publishing and notable, in this area, is her work as curator of the Another Place Festival and Graduate Exhibition 2018 in the Academy of Fine Arts in Prague. She was also curator of the Czechoslovakian pavilion at the Venice Biennale of Architecture in 2004.