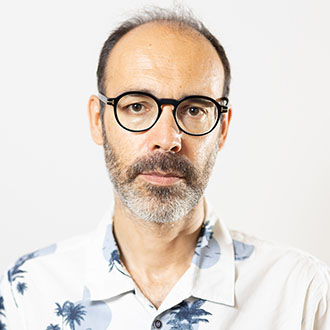 Regarded as one of the most innovative writers of travel literature in Spain, his literary career has also linked him with nature writing. His most notable travel books include Los mares de Wang (The Seas of Wang, Alfaguara, 2008), named Best Non-Fiction Book by Condé Nast Traveller magazine, and Sudd (Alfaguara, 2007), a novel that was made into a comic by Gléna. Besides travel literature, his other outstanding works include Ático (Attic, Destino, 2004), for which the publisher Palgrave/MacMillan named him one of the five most representative authors of the Spanish vanguard in the last twenty years; other titles are: In the Land of Giants (Scribe, 2016), Las defensas (The Defences, Seix Barral, 2017), and Animales Invisibles (Invisible Animals, Capitán Swing & Nórdica Libros, 20192019). He is also one of the promotors of the Liternatura Festival, an invitation to rethink the relations between people, creation, and nature. His concerns about relating with nature are patent in his Un cambio de verdad (A True Change, Seix Barral, 2018), a chronicle of the radical experience of rural life that resists being obliterated by urban expansion