"The future of European city" 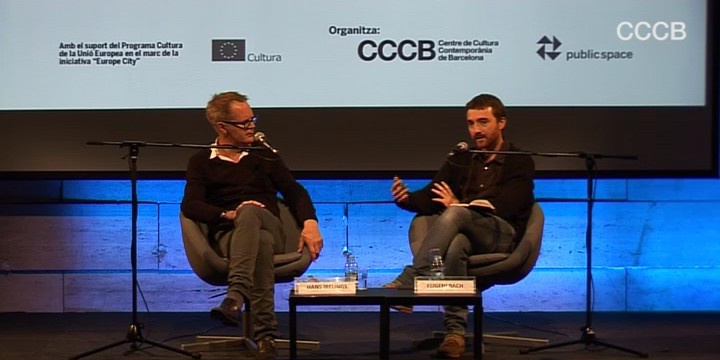 Hans Ibelings and Eugeni Bach met at the CCCB to talk about the essential features of public space in Europe and in other parts of the world.

The Dutch architecture critic Hans Ibelings and the Catalan architect Eugeni Bach met at the Centre of Contemporary Culture of Barcelona (CCCB) last month to talk about the essential features of public space in Europe and in other parts of the world. Their discussion was one of the activities organised on the occasion of the “Shared Cities” exhibition of outstanding works submitted for the 2014 European Prize for Urban Public Space.

Hans Ibelings opened his remarks by mentioning his experiences in Montreal, comparing the public space that is specific to European cities with the differences he noted during his time in Canada. He commented on the imaginary of European public space, contrasting it with a series of images of Canadian public space. He remarked that although the two places “share a series of similar values”, in Canada “they don’t spend much time or energy on their streets and squares. In fact, squares are notable for their absence”. Next, and referring to his impressions of the “Shared Cities” exhibition, he noted that in Europe, for example, public spaces are mainly conceived as open places without any specific practical purpose while, in Canada, the planning and composition of a public space are more directly linked with an idea of people engaging in some particular kind of community activity.

Eugeni Bach then responded, thus opening their dialogue. He suggested a series of themes that should be debated: history, private transport, public space and domestic space, democracy, participation, architecture and public space, and specific design of public space.