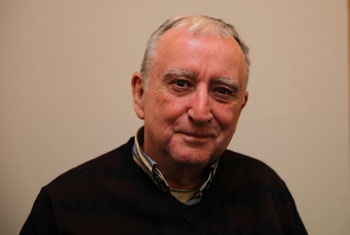 Rafael Chirbes (Tavernes de la Valldigna, Valencia, 1949) is one of Spain’s most acclaimed writers today. He studied Modern and Contemporary History in Madrid and, in addition to his articles on gastronomy, oenology, and travel, he writes as a literary critic for different media publications. His work has well received in Spain relatively recently: Crematorio was awarded the 2008 National Critics’ Prize and En la orilla was named best novel for 2013 by the daily El País. However, he has also been widely read in Germany since the 1990s and the German translation of La larga marcha, which sold 100,000 copies,was awarded the SWR-Bestenliste Prize. His books offer a stark account of the hardships and general wretchedness caused by the Spanish Civil War and its aftermath, thus placing him among the writers who have best depicted the wounds of the conflict and Spain’s recent history. His last two novels constitute a harsh criticism of the years of real-estate speculation and generalised corruption and greed.

He has published essays:
As well as nine novels, all them published by Anagrama.
[Update: January 2014]